Angular speed is the measure of how fast the central angle of a rotating body changes with respect to time. In this short piece of article, let us learn more angular speed formula, the relationship between angular speed and linear speed along with a few angular speed problems.

What is Angular Speed?

where \(\theta\) is the angular displacement

t is the time

\(\omega\) is the angular speed

A scalar measure of rotation rate is known as Angular Speed (ω). In one complete rotation, angular distance travelled is 2π and time is time period (T) then, the angular speed is given by,
\(Angular\,Speed=\frac{2\pi}{T}\).
From the above equation, we can concur that ω is equivalent to 2πf, where 1/T is equivalent to f (frequency).
Thus, the rotation rate is also articulated as an angular frequency.

Let the object be travelling in a round path of radius r and angular displacement be θ then we have, angle, θ = arc/radius 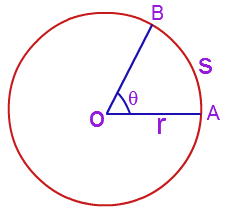 We know that linear speed, V =S/t,
where S is a linear displacement of arc, and
θ = S/r

ω = V/r
Where V is equivalent to the linear speed

This is the relation amongst angular speed, linear speed, and radius of the circular path.
From this relation, one can compute this speed.