Addition And Subtraction Of Vectors

The addition of vectors is not as straightforward as the addition of scalars. Vectors have both magnitude and direction, and one cannot simply add two vectors to obtain their sum. To better understand this, let us consider an example of a car travelling 10 miles North and 10 miles South. Here, the total distance travelled is 20 miles, but the displacement is zero. The North and South displacements are each vector quantities, and the opposite directions cause the individual displacements to cancel each other out. In this article, let us explore ways to carry out the addition and subtraction of vectors.

As already discussed, vectors cannot be added algebraically. Following are a few points to remember while adding vectors:

Suppose there are two vectors, a and b.

The line AC represents the resultant sum of the vectors a and b.

The magnitude of vectors a and b is:

a = magnitude of vector a

b = magnitude of vector b

θ = angle between vector a and b

Let the resultant make an angle of Φ with vector a, then:

Let us understand this using an example. Suppose two vectors have equal magnitude A, and they make an angle θ with each other. Now, to find the magnitude and direction of the resultant, we will use the formulas mentioned above.

Let the magnitude of the resultant vector be B.

Let’s say that the resultant vector makes an angle Ɵ with the first vector.

According to this law, if two vectors, P and Q, are represented by two adjacent sides of a parallelogram pointing outwards, as shown in the figure below, then the diagonal drawn through the intersection of the two vectors represent the resultant.

In Parallelogram Law of Vector Addition, the magnitude of the resultant is given by:

The direction of the resultant vector is determined as follows:

According to the polygon law of vector addition, if the number of vectors can be represented in magnitude and direction by the sides of a polygon taken in the same order, then their resultant is represented by magnitude and direction such that the closing side of the polygon is taken in the opposite direction.
Let vector A, vector B, vector C and vector D be the four vectors for which the resultant has to be obtained.

Consider triangle OKL, in which the vectors A and B are represented by sides OK, KL and are taken in the same order. Therefore, from the triangle law of vector addition, we know that the closing side OL is considered in the opposite direction such that it represents the resultant vector OR and KL.
Therefore,

From the triangle law of vector addition, we know that triangle OLM can be expressed as vector OM is the resultant of the vectors OL and LM.

Click the below video to understand the application of the polygon law of vector adding: 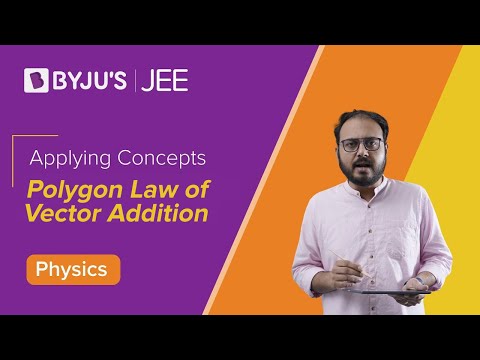 The subtraction of two vectors is similar to addition. Suppose vector a is to be subtracted from vector b.

vector a – vector b can be said as the addition of vectors a and -b. Thus, the addition formula can be applied as:

vector (-b) is nothing but vector b reversed in direction.

What is the maximum and minimum sum of two vectors?

Is vector addition applicable to any two vectors?

No, vector addition does not apply to any two vectors. Two vectors are added only when they are of the same type and nature. For instance, two velocity vectors can be added, but one velocity vector and one force vector cannot be added.

The associative property of vector addition states that the sum of the vectors remains the same regardless of the order in which they are arranged.

Can the sum of two vectors have a zero?

Yes, two vectors with equal magnitude and pointing in opposite directions will have the sum equal to zero.

Stay tuned with BYJU’S to learn more about vectors, vector notation and much more.
Test your knowledge on Addition Of Vectors
Q5