Have you ever needed to make an extremely precise measurement? Industries that work with small parts and fittings have to make precise measurements. In many places, the measurement should be close to the exact value to avoid potential danger. To obtain such precise and accurate measurements, we turn to micrometers.In this article, let us discuss in detail about the micrometer.

It is often misunderstood with the micrometer (μm) – the standard unit of length measurement. Another common name used for a micrometer is micrometer caliper due to its similar appearance to the caliper. 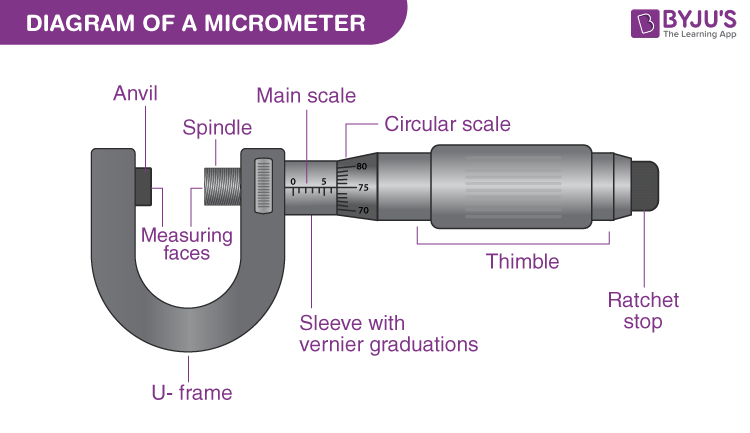 Parts of a Micrometer

A micrometer is composed of the following parts:

Heart of the Micrometer

Micrometers transform small distances into large rotations of the screw that can be read from a scale. The basic operating principle of a micrometer are as follows:

When is a Micrometer Used?

A micrometer is used when precise measurement is needed. Following is a list of applications of micrometer:

Hope you have learned about the micrometer. Stay tuned with BYJU’S and fall in love with learning.

What is a micrometer?

A micrometer is an instrument used for making precise linear measurements of dimensions such as diameter, thickness, and lengths of solid bodies.

What is micrometer also known as?

Micrometer is also known as a micrometer caliper.

Which is the part of the micrometer that has a C-shaped body that holds the anvil and barrel.

Frame is the C-shaped body that holds the anvil and barrel in constant relation to each other.

What is a locknut in a micrometer?

Locknut is a component that can be tightened to hold the spindle stationary.

State true or false: In a micrometer, the screw located within the barrel is considered the heart of the micrometer.