Motion of Celestial Bodies in Space

The celestial bodies in space, like the planets and satellites, move in paths that obey the laws of motion. In this article, let’s study the motion of the Celestial Bodies and the law which governed them.

Celestial bodies or heavenly bodies are objects in space such as the sun, moon, planets, and stars. They form a part of the vast universe we live in and are usually very far from us. The glorious night sky is dotted with such objects, and when we observe them using a telescope, they reveal fascinating worlds of their own.

Motion of the Celestial Body

The branch of astronomy that deals with the study of the motion of objects in space are known as celestial mechanics. These heavenly bodies move in such a way due to the attractive force of gravity. The elliptical orbit is kind of an elongated circle. Instead of having a single centre like a circle, ellipses have two centres called foci (singular=focus). 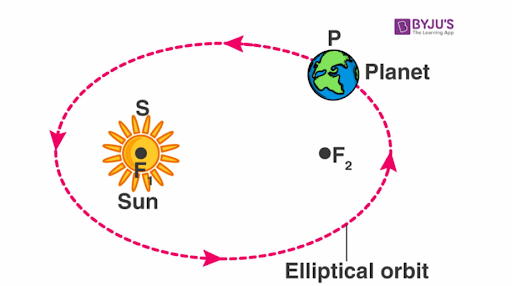 For planets in space, the centre of the sun is always at one of the focus as shown in the figure above. The larger the distance between the two foci, the more elongated the ellipse is.  The amount of the elongation of the orbit is given by the eccentricity of the orbit. Most planets have a very small eccentricity. The Earth’s orbit has such a low eccentricity that both the foci lie within the sun itself! So you can say that the earth’s orbit is almost circular.

Stay tuned with BYJU’S application for more such interesting articles. Also, register to “BYJU’S – The Learning App” for interactive and engaging science videos.

Kepler’s second law states, “The radius vector drawn from the sun to the planet sweeps out equal areas in equal intervals of time”

What is Kepler’s law of periods?

According to Kepler’s law of periods,” The square of the time period of revolution of a planet around the sun in an elliptical orbit is directly proportional to the cube of its semi-major axis”.

What are the seven celestial bodies?

How do celestial bodies move in space?

All the heavenly bodies like planets and satellites move in an elliptical orbit due to the attractive force of gravity. Their centrifugal motion is balanced by gravitational attraction.
Test your Knowledge on Motion Of Celestial Objects In Space
Q5