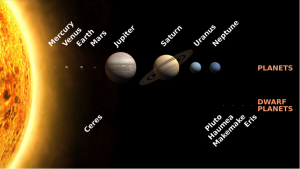 Our solar system includes Sun, planets, satellite etc. but we have other members also which play a very important role in the existence of universe the way it exists today. Let us briefly discuss the other members of the solar system.

The solar system is huge at least 100 Astronomical Units in size (15 trillion km). It is held together by the sun’s immense gravitational pull that keeps objects like the planets and the asteroids in orbit around it.

The sun is the biggest object in the solar system and provides energy to the earth by nuclear reactions that occur in its center. The sun is a star and has a surface temperature of 6000 ⁰C! It is mostly composed of Hydrogen gas along with a small amount of Helium gas.

What does the Solar System consists of?

The solar system also contains 8 planets which are large almost spherical objects that revolve around the sun in elliptical paths known as orbits. The earth is also one of the planets and lies at a distance from the sun such that it is neither too hot nor too cold for life to exist. The planets were formed at least 4.6 billion years ago when discs of dust and gas orbiting around the sun collapsed and clumped together due to gravity. There are two kinds of planets:

The solar system also contains small irregularly shaped objects made of rock, metal, and carbon called asteroids orbiting the sun. Most of these objects lie between the orbits of Mars and Jupiter in the asteroid belt.

To Know Awesome Facts About The Sun, Watch The Below Video: 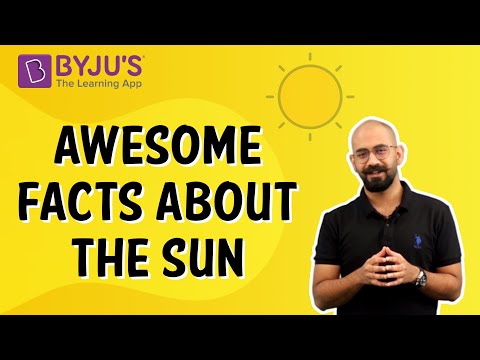 These are big chunks of rock or metal that are mostly found orbiting the Sun between Mars and Jupiter. It is believed that these moons did not originally orbit Mars, but were instead a part of the Asteroid belt. The asteroid belt lies between Mars and Jupiter. It contains lumps of rock much smaller than planets. These lumps are called asteroids or minor planets. They are not visible from Earth with the naked eye, but many may be seen through binoculars or small telescopes.

Satellites are objects that revolve around planets and are also part of the solar system. The Earth’s satellite is the Moon. Some satellites like Ganymede (orbiting Jupiter) are bigger than Mercury and can have atmospheres.

Comets are small irregularly shaped objects made up of ice. They usually come from the outermost reaches of the solar system beyond Neptune from a region known as the Kuiper Belt. When these objects come close to the sun, the ice vaporizes forming a beautiful tail behind them. Some of these comets appear regularly such as the Halley’s Comet which appears once every 76 years (the next time in year 2061!).

Dwarf planets are objects smaller than planets and larger than asteroids that orbit the sun at various places. The nearest dwarf planet to us is Ceres which lies in the asteroid belt. The most famous is Pluto which lies beyond Neptune on the inner edge of the Kuiper belt. In 2014, Pluto and its 5 satellites were visited by a spacecraft named New Horizons for the first time in history capturing images of the icy dwarf planet in high resolution.

Like to learn more science, watch our videos by downloading BYJU’S – The Learning App!