Refraction And Dispersion Of Light Through A Prism 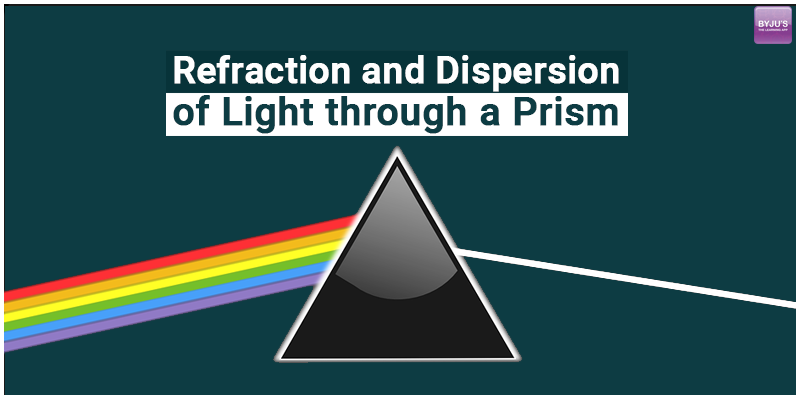 This article deals with the following topics regarding the dispersion of light through a prism.

What is Dispersion of Light?

When white light is passed through a glass prism it splits into its spectrum of colours (in order violet, indigo, blue, green, yellow, orange and red) and this process of white light splitting into its constituent colours is termed as dispersion.
The simplest way to explain dispersion is through dispersion in the prism.

Refraction Of Light Through Prism

How is light refracted through a glass prism?

When light travels from one medium to another, the speed of its propagation changes, as a result, it ‘bends’ or is ‘refracted’. Now when light passes through a prism, it is refracted towards the base of the triangle. Refraction Of Light Through Prism is well illustrated in the diagram given above.

Why does light split into its spectrum of colours in a prism but not in a glass slab?

Actually, light does disperse into its spectrum of colours in a glass slab as well. We can see this if we observe it in a particular way. Before we proceed you should know something about refractive indices. They aren’t constant. They vary with the frequency of light and hence the wavelength.

What is the significance of the dispersion of light into its spectrum of colours?

Newton was the first to conduct this experiment on passing light through a prism. He let sunlight pass through the prism expecting to see the white light on the screen placed at the other side but instead, he saw the spectrum of light after dispersion. He had a small hunch regarding the significance here but decided to do something else here to confirm it.

Hope you have understood what is the dispersion of light? If you wish to learn more physics concepts with the help of interactive video lessons, download BYJU’S – The Learning App.