To study the relationship between the temperature of a hot body and time by plotting the cooling curve. Mathematically, it can be expressed as follows:

For a body of mass m, specific heat c, with a temperature T kept in the surrounding of temperature T0, the heat energy is given as follows:

ms is a constant,

From the above relation, it is clear that as time increases, T decreases, (T–T0) decreases, as result the fall of temperature (dT/dt) must also decrease. 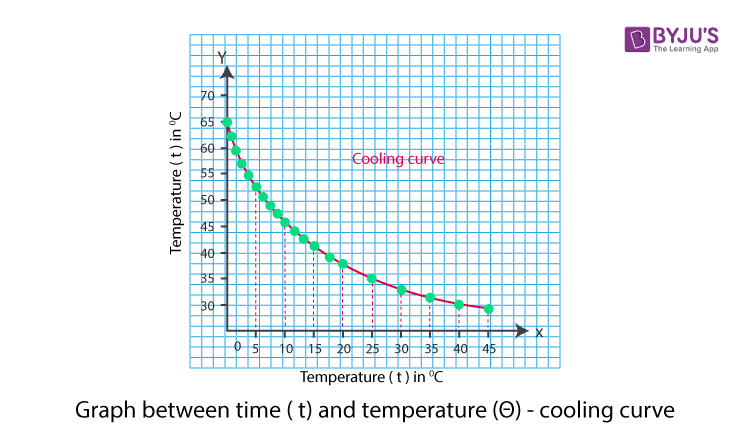 The temperature is seen to fall quickly in the beginning and then the difference in temperature slowly decreases. This is in agreement with Newton’s law of cooling.

1. Why is water used as a cooling and heating agent?

Answer: Water has high specific heat capacity because of which it absorbs more quantity of heat than others.

Answer: Newton’s law of cooling states that the rate of change of temperature of a body is directly proportional to the difference between its own temperature and the temperature of its Surrounding.

3. Why does a baby need more wrapping of woollen clothes than an adult?

Answer: Mass and the rate of fall of temperature are inversely proportional to each other. As the mass of a baby is lesser than an adult man, the baby loses a larger amount of heat than a grownup adult. Hence, a baby needs more wrapping.

4. Why is it easy to heat a hot pudding in a large plate than it is to heat it in a bowl?

Answer: The rate of cooling is directly proportional to the volume. Hence, a large plate cools faster than a bowl.

Answer: The heat required to raise the temperature of unit mass by 1oC is known as the specific heat capacity

Stay tuned with BYJU’S to get the latest notification on CBSE along with CBSE syllabus, sample papers, marking scheme and more.

Test Your Knowledge On Relationship Between Temperature Of Hot Body And Time By Plotting Cooling Curve!
Q5