What is Remote Sensing?

Remote Sensing is a technology to gather information and analyzing an object or phenomenon without making any physical contact. This technology is used in numerous fields like geography, hydrology, ecology, oceanography, glaciology, geology.

A geographic information system is a tool that is used for mapping and analyzing feature events on Earth. The remote sensing and gis technology combine major database operations like statistical analysis and query, with maps. The GIS manages information on locations and provides tools for analysis and display of different statistics that include population, economic development, characteristics, and vegetation. It also allows linking databases to make dynamic displays. These abilities make GIS different from other systems and make it a wide range of private and public remote sensing applications for planning and predicting outcomes from remote sensing satellites.

There are three essential elements for Remote Sensing : 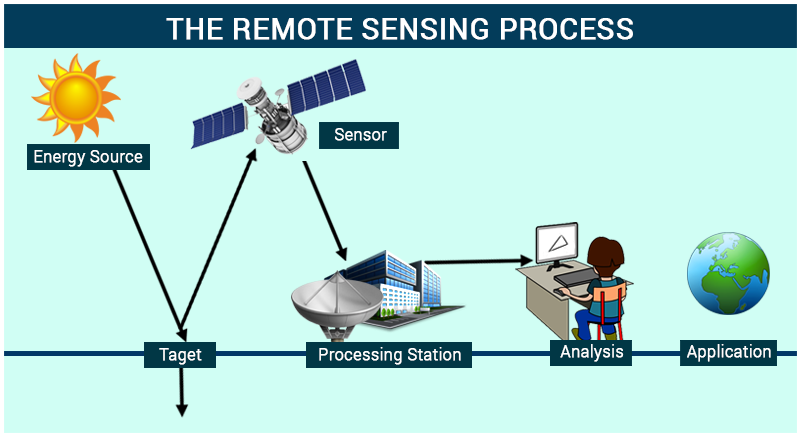 The technology of modern remote sensing began with the invention of the camera. Earlier photographs were “still photographs”, but the idea of taking Earth’s images for the purpose of topographic mapping emerged during the 1840s. Cameras were fixed in balloons for the sake of taking images. During WWI, cameras were mounted on airplanes to get an aerial view of lands which proved to bring revolution in the military. It was only during the space age, Satellite remote sensing evolved. They were used for the purpose of imaging Earth surfaces as well as sensor other spacecraft. The term “remote sensing” was first used in the United States in the 1950s by Ms. Evelyn Pruitt of the U.S. Office of Naval Research.

Satellites equipped with sensors observing earth are known as the remote sensing satellites. These satellites go round in a specified orbit and are called the “eyes of the sky”.

Optical sensors detect solar radiation reflected or scattered from the earth and thus develop images of Earth. This is known as the Optical and Infrared Remote Sensing. The images formed by these sensors resemble that of photographs taken by a camera.