Solar energy is the energy emitted by the sun in the form of radiant light which is then harnessed by humans using a variety of methods such as solar heating, photovoltaic cells etc. It is inexhaustible. Sources of energy such as solar energy do not belong to anyone and hence it is free. The amount of solar energy received by the world was calculated to be 3000-50000 exajoules (EJ) which is much larger than the total world energy consumption of 600 EJ. So how to harness the awesome power of the Sun? 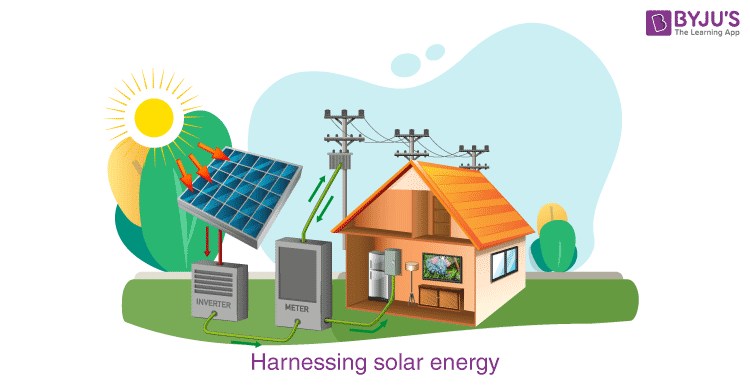 The operation of a photovoltaic (PV) cell requires 3 basic attributes:

Harvesting the power of the Sun: Solar Cell

Solar power refers to the conversion of the sun’s radiant energy in the form of light into electricity. This is done by the Photovoltaic cell also known as the Solar Cell. Silicon along with germanium and such is a part of a group of elements known as semiconductors. Its electrical conductivity lies in between the conductors, the metals, and the insulators. Silicon is the key ingredient in solar cells. Let’s take a closer look at what happens when the sun shines onto a solar cell.

Sunlight is composed of tiny balls of energy known as photons. The photons in sunlight strike the solar cell and they are absorbed by the silicon atoms that the cell is made of. The sunlight consisting of energy packets i.e. photons excites the electrons and protons and causes it to jump to a higher energy level. It jumps from a stationary valence orbit to a conduction band where it is mobile. Once excited the electron has two options, first, the electron can dissipate the energy it gained as heat and return to its original position. Second, the electron can travel through the body creating a current.

The image below illustrates the creation of the current in a solar cell. Let’s explore it in depth. 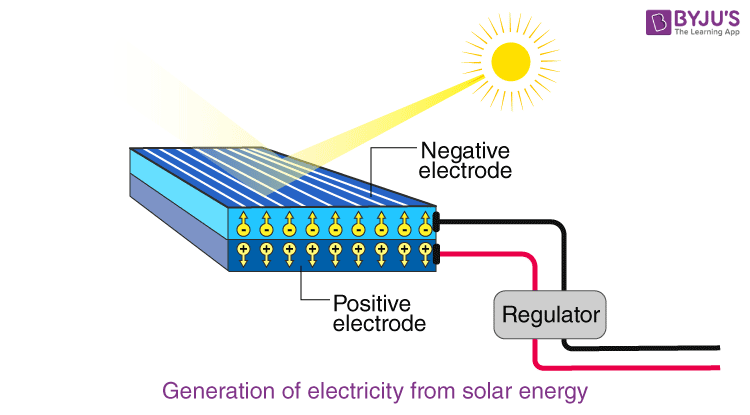 Here comes the distinction between a p-type semiconductor and an n-type semiconductor. Whether an electron does the first or the second is decided by the extent of doping of silicon. The chemical bonds play a significant role in the production of electricity in a solar cell. When the n-type is brought in contact with a p-type, the charge carriers from the n-type, electrons jump over to the p-type to neutralize the holes. This leads to the creation of a depletion region at the junction with no mobile carriers. This diffusion does not occur indefinitely and this causes a build-up of charges leading to the creation of an electric field. This electric field causes the electrons to drift away.

The electric field causes, the electron which has jumped into the conduction band and the hole which is a result of the electrons excitation, to move in the opposite direction since they are oppositely charged. These separated charges comprise the current which can then be used to power any electrical device. The solar cell converts solar energy into usable electricity in the form of Direct Current.

Such solar cells can be combined to yield solar panels used to power homes or to yield solar arrays like the ones used in space satellites. Such solar arrays can be almost as large as football fields. Although this technology promises endless energy, there are a few obstacles in the way. Mostly technological ones. The efficiency of a commercially available solar panel is 12-18% and the maximum efficiency achieved in the lab is around 45%. The addition of different layers of metals and compounds on the top increases the efficiency and the lifetime of the solar cell.

Amazing, isn’t it? The key to endless energy is a few technological improvements away. Understand things conceptually and you could be the one causing a scientific revolution. Download BYJU’S – learning app and learn the right way.

What is meant by renewable energy?

It is the energy accumulated from renewable sources that are naturally reloaded.

Solar energy is the energy generated from radiation emitted from the Sun.

What are the highlights of solar energy?

What are the drawbacks of solar energy?

The production is relatively slow during cloudy days and cold seasons.

Initial cost and installation are expensive.

What are the main components of a solar cell?

A solar cell is made up of semiconductor substances such as cadmium telluride, silicon, arsenide, and gallium.

What is the main constituent of sunlight?

Sunlight is made of packets of energy called photons.

What is the efficiency of a solar cell?

The efficiency of a consumer-level solar panel is about 12-18%, and the maximum efficiency attained in labs is around 45%.

What is the main application of solar cells?

Solar cells can be merged to create gigantic solar panels employed to generate electricity for homes or to create solar arrays which are used in artificial satellites. Such solar arrays can be almost as big as football grounds.

Test your Knowledge on uses of zener diode
Q5