Solar power is indefinitely renewable source of energy as the sun has been radiating an estimated 5000 trillion kWh of energy for billions of years and will continue to do so for the next 4 billion years. Solar energy is a form of energy which is used in power cookers, water heaters etc. The primary disadvantage of solar power is that it cannot be produced in the absence of sunlight. This limitation is overcome by the use of solar cells that convert solar energy into electrical energy. In this section, we will learn about the photovoltaic cell, their advantages, and disadvantages.

It is defined as the radiating light and heat from the sun that is harnessed using devices like heater, solar cooker, photovoltaic cell to convert it to other forms of energy such as electrical energy and heat. 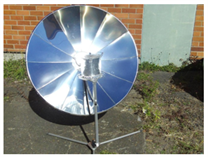 Q.1) How does solar cell work?

A solar panel works by allowing particles of light, or photons, to knock electrons free from atoms, generating a flow of electricity.

Q.2) What is solar cell principle?

Silicon crystals are laminated into p-type and n-type layers, stacked on top of each other. Light striking the crystals induces the “photovoltaic effect,” which generates electricity.

Q.3) What is meant by photovoltaic cell?

A crystalline silicon solar panel which is a series of interconnected silicon cells joined together to form a circuit.

Q.5) How voltage develops in a solar cell?

Q.6) What is the principle of a photovoltaic cell?

Stay tuned with BYJU’S to learn more about the photovoltaic cell, types of energy and much more.

Test your Knowledge on Solar Energy And Photovoltaic Cell
Q5