Stereochemistry covers all important aspects of stereochemistry starting right from the history of stereochemistry and discussing molecular geometry in terms of bond distances and dihedral angles along with the biological importance of chirality and its effect on taste, odour, agro chemicals and pharmaceuticals followed by the basic principles, conformations and configurations, the methods for writing structures in two dimensional and three dimensional projections and their interconversions. 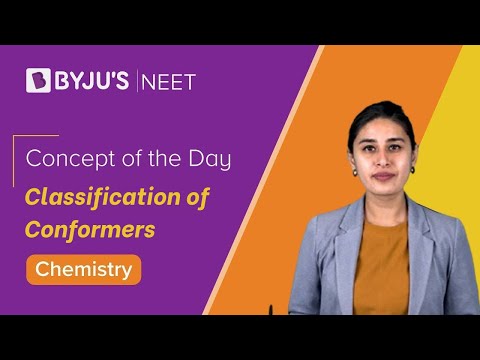 Energy Contents and Nomenclature of Conformers

The following diagram shows the full rotation about a C-C single bond, the relative energy contents, and the names of the conformers depending on the dihedral angle.

Eclipsed groups with bonds enclosing dihedral angles of 0o in the Newmann projection suffer from overcrowding in space, in this situation they develop the most intense steric interaction, strongly repulsing each other. Thus conformers with fully and partially eclipsed groups occupy energy maxima and have the lowest stability.

What is conformation in stereochemistry?

Conformational analysis is the study of atom group configurations in a molecule, and the energy associated with these configurations. As atom groups rotate around different carbon-carbon axes the various shapes that they take are called conformations. The spectrum of conformations goes from eclipsed, to gauche, to anti.

What is Newman projection formula?

Are conformers the same molecule?

Dynamic molecules are formed by the rotation of single bonds. However, rotation around the carbon-carbon bond contributes to several different potential molecular conformations. Conformers are the simplest example of stereoisomerism. Identical compounds are the same compound in the same spatial orientation as seen for all atoms.

What does enantiomer mean?

What is meant by Superimposable?

What is chiral structure?

In chemistry, if it can not be superimposed on its mirror image by any combination of rotations and translations, a molecule or ion is called chiral. When the center coincides with an atom it is said that the substance has point chirality. A stereocenter, in organic chiral compounds, is often an asymmetric carbon.

Test your Knowledge on Conformers!
Q5