In optics, aberration is a property of optical systems such as lenses that results in light being spread out over some region of space rather than being focused to a point. An image-forming optical system with aberration will produce an image that is not sharp. Aberration can be caused due to a variety of reasons such as lens size, material, thickness and position of the object. In this article, let us learn more about aberration and its type.

What is Optical Aberration?

In an ideal lens, light from any given point of an object would pass through the lens and come together at a single point in the image plane. Contrary to ideal lenses, real lenses do not focus light to a single point. These deviations from the idealized lens performance are known as an aberration of the lens.

When the light of a single wavelength is considered, there are five monochromatic aberrations to be considered and they are:

When the light is not monochromatic (not of a single wavelength), a sixth aberration is found in lenses but not in mirrors and is named chromatic aberration.

In spherical aberration, rays of light from a point on the optical axis of a spherical lens do not all meet at the same image point. Rays passing closer to the center are focussed farther away than the rays passing through a circular zone near its rim. A circular cross-section is formed whenever a plane held perpendicular to the optical axis is made to intersect a cone. The area of the cross-section varies with the distance along the optical axis. The smallest size is known as the circle of least confusion. The most spherical aberration-free image is found at this distance.

The name “Coma” is derived from the fact that a point image is blurred into a comet shape, when rays from an off-axis object point are imaged by different zones of the lens. In spherical aberration, the images of an object point that fall on a plane perpendicular to the optical axis are circular in shape of varying size, and superimposed about a common center. In coma, the images of an off-axis object point are circular in shape, of varying size, but displaced with respect to each other.

The image shows two images, one resulting from a central cone of rays and the other from a cone passing through the rim.

Astigmatism is the result of the failure of a single zone of lens to focus the image of an off-axis point at a single point. In the figure, we see two planes perpendicular to each other passing through the optical axis. These planes are known as the meridian plane and the sagittal plane, the meridian plane being the one containing the off-axis object point. Skew rays, rays not in the meridian plane are focused farther away from the lens than those lying in the plane. In either case the rays do not meet in a point focus but as lines perpendicular to each other. Intermediate between these two positions, the images are elliptical in shape. 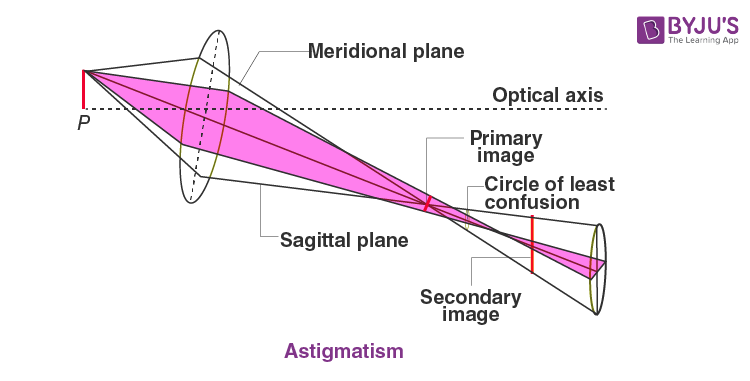 Curvature of field and distortion refer to the location of image points with respect to one another. The former three aberrations mentioned so far can be corrected by making corrections in the design of the lens, but these two aberrations could remain. In curvature of the field, the image of a plane object perpendicular to the optical axis will lie on a paraboloidal surface known as the Petzval Surface. Distortion, on the other hand, refers to the deformation of an image. There are two kinds of deformation, namely barrel distortion and pincushion distortion.

Test your Knowledge on Aberration Of Lens
Q5