We have seen quantities like velocity, acceleration, mass, etc. and know what they signify. Now we will define a quantity known as momentum, which is mathematically represented as:
P = mv
It is the amount of motion a body possesses. As it is a product of mass and velocity, like velocity, it is also a vector quantity. Its unit is Kg m s-1. Now we will relate the kinetic energy with its linear momentum.
P = mv

Squaring both sides and dividing by 2 we get,

So if two bodies having different masses have the same kinetic energy than the one with lighter mass has smaller momentum.

How to Calculate the Rate of Change of Momentum?

So, according to the conservation of momentum,

But one thing to take care is that conservation is only true for a system and not one body because if we consider only a single body m1 or m2, then the net force will be acting on it, so we cannot write m1u1 ≠ m1v1 or m2u2 ≠ m2v2.

Watch the demonstration of conservation of energy and momentum using coins! 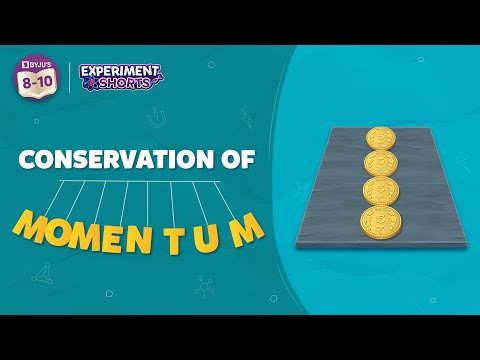 To learn more about the conservation of momentum and its practical application, download BYJU’S – The Learning App. Stay tuned with BYJU’S for more interesting articles, loads of interactive, engaging Physics-related videos and unlimited academic assistance.

Test Your Knowledge On Conservation Of Linear Momentum!
Q5