Pressure builds up in the earth’s crust and this is the reason why eruptions occur. Gases and igneous rocks shoot up and splash over or fill the air with lava fragments. The volcano eruption can cause hot ash, lateral blasts and lava flow, mudslides, and more.

A volcano mountain is formed by the surface eruption of magma from within the earth’s upper mantle. The magma that erupts to the surface and forms a lava flow that deposits ash. As the volcano continues to erupt, a new layer of lava is added to the surface accumulating to form a mountain.

They tend to be conical although there are a variety of forms, depending upon:

Reason Behind the Eruption of Volcanoes:

The volcano eruption begins with the formation of magma in the lower section of the earth’s crust. The earth’s crust is made up of massive slabs called plates, which fit together like a jigsaw puzzle. The friction during the movement of plates causes earthquakes and volcanic eruptions. 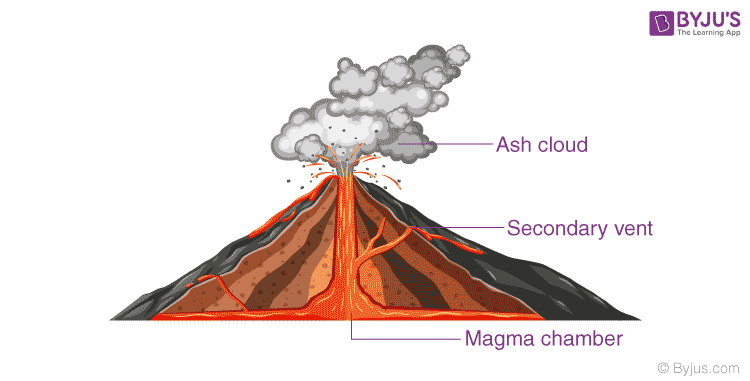 With pressure, it travels upwards with tremendous force hitting solid rocks and other material and creates a new passage to the earth’s surface. Once the magma reaches the air it is called lava.

These are grouped into four types:

Cinder Cones: These are the simplest type of volcano. They occur when particles and blobs of lava are ejected from a volcanic vent. The lava is blown violently into the air, and the pieces rain down around the vent. Over time, this builds up a circular or oval-shaped cone, with a bowl-shaped crater at the top. Cinder cone volcanoes rarely grow larger than about 1,000 feet above their surroundings.

Composite Volcanoes: Composite volcanoes are some of the Earth’s grandest mountains, and they are also called as stratovolcanoes. They are typically symmetrical cones of large dimension built of alternating layers of lava flows, steep-sided, volcanic ash, blocks, bombs, and cinders and may rise as much as 8,000 feet above their bases.

Shield Volcanoes: A shield volcano is a type of volcano usually built almost entirely of fluid lava flows. They have very gentle slopes and are developed horizontally. Shield volcanoes are built by effusive eruptions, which flow out in all directions. They almost never have violent eruptions, with basic lava simply flowing out.

Lava Domes: Lava domes are the fourth type of volcano that we are going to discuss. Unlike composite and shield volcanoes, lava domes are of tiny stature. They are formed when the lava is too viscous to flow to a great distance. As the lava dome slowly grows, the outer surface cools and hardens as the lava continues to pile within. Eventually, the internal pressure can shatter the outer surface, causing loose fragments to spill down its sides. Generally, such lava domes are found on the flanks of larger composite volcanoes.

Stay tuned with BYJU’S to learn more about volcanoes, types of volcanoes, and much more.

Test your Knowledge on Volcanoes
Q5