The kinetic energy derivation using only algebra is one of the best ways to understand the formula in-depth.

Starting with the work-energy theorem and then adding Newton’s second law of motion we can say that,

Now, taking the kinematics equation and rearranging it, we get 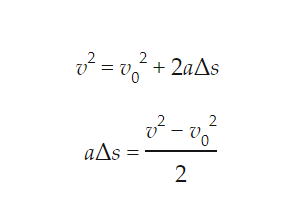 Combining the 2 expressions we get, Now rearranging the differential terms to get the function and the integral into an agreement. Stay tuned with BYJU’S and learn various other derivation of Physics formulas.