In this article, let us learn about the electric field intensity due to a thin, uniformly charged infinite plane sheet.

The uniform distribution of the surface charge on an infinite plane sheet is represented as \(\sigma\). In the above figure, the x-axis is normal to the given plane. The electric field does not depend on y and z coordinates, and its direction at each point shall be parallel to the x-axis.

The Gaussian surface considered in the above case is a rectangular parallelepiped having a cross-sectional area A. 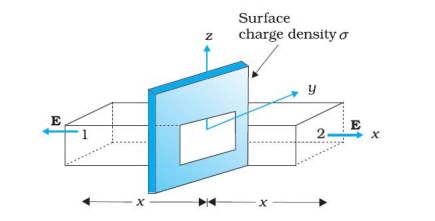 It is noticed that only the faces 1 and 2 will contribute to the flux (the unit vector \(\hat{n}\) and \(\vec{E}\) are parallel to each other). The electric field lines are perpendicular to the other faces and therefore, do not contribute to the total flux.

In the closed surface, the net charge enclosed is given by \(q = \sigma * A\)

The nature of charge distribution decides the direction of the electric field vector.

It is clear from the above expression that E is independent of the distance of the point from the plane charged sheet.

Consider two plane parallel sheets of charge A and B. Let \(\sigma1\)

and \(\sigma2\) be uniform surface charges on A and B.

Electric field due to sheet A is

Electric field due to sheet B is

Note: There exists no electric field in the region between two sheets which are parallel to each other.

Read more about Electricity and magnetism

Stay tuned with BYJU’S for more such interesting derivations in physics, chemistry and maths in an engaging way with video explanations.

1. What is an electric field?

An electric field is defined as the electric force per unit charge and is represented by the alphabet E.

2. What is the formula to find the electric field intensity due to a thin uniformly charged infinite plane sheet?

3. How is the uniform distribution of the surface charge on an infinite plane sheet represented as?

4. What is the net flux through the Gaussian surface?

5. What is the formula for an electric field?