Infrared Radiation In The Electromagnetic Spectrum

What are Infrared Rays?

Infrared waves are also referred to as heat or thermal waves. This is because they have a heat-inducing property. Sometimes infrared rays are used in applications where heat production is required like in infrared heaters or for therapeutic purposes where a patient requires physical therapy. 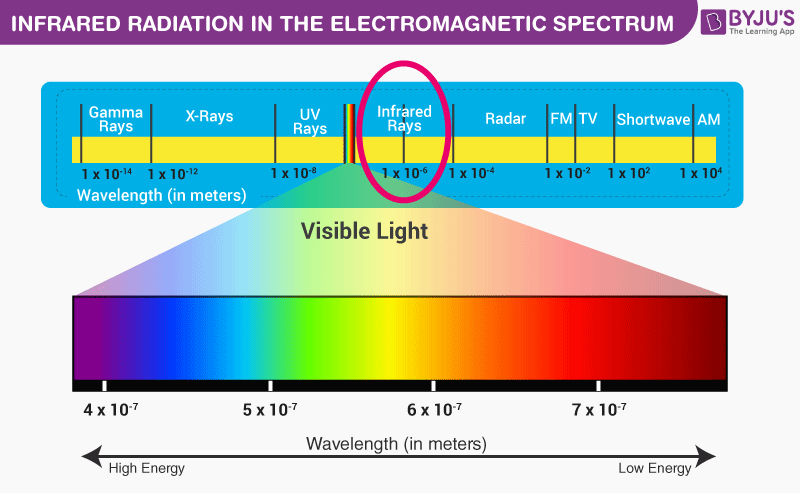 Given below in a table are a few properties of infrared radiation.

Infrared light can also be called thermal light. The light which falls on your body when you sit near a campfire or even the light of the sun, these kinds of lights also emit some thermal energy which causes you to feel the heat. Infrared heaters also come under this where they use infrared radiation to generate thermal energy.

Stay tuned with BYJU’S to fall in love with learning!

What is infrared radiation?

Infrared radiation (IR), sometimes known as infrared light, is electromagnetic radiation (EMR) with wavelengths longer than those of visible light.

Following are a few properties of infrared radiation:

What is a quantum type infrared detector?

This can be either an intrinsic type or extrinsic type. The detection performance is higher when compared to the thermal type. Intrinsic type is further divided into two and they are photoconductive type and photovoltaic type. Photosensitivity of these detectors are dependent on the wavelength.

What is thermal energy?

Thermal energy is the energy that comes from the temperature of matter. The hotter the substance, the more is the vibration of molecules and hence the higher is the thermal energy.
Test Your Knowledge On Electromagnetic Spectrum Infrared Rays!
Q5