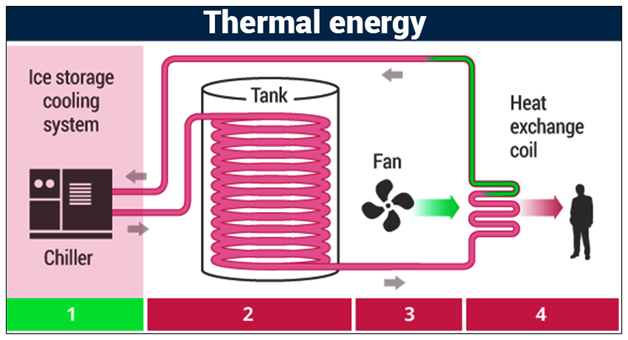 What is Thermal Energy?

Thermal energy is the energy that comes from the temperature of matter. The hotter the substance, the more is the vibration of molecules and hence the higher is the thermal energy.

What is Thermal Energy Storage?

Thermal energy storage is defined as a technology that allows the transfer and storage of heat energy or energy from ice or water or cold air. This method is built into new technologies that complement energy solutions like solar and hydro.

The thermal energy(either chilled or hot water) is produced in the periods of off-peak electrical demand or utilization and collected in a thermal energy storage tank, then withdrawn and distributed to the facility during peak periods. The hot or chilled water enters and exits the tank via diffusers located at the top and base of the tank. The diffusers are designed to erase turbulence and allow the water in the tank to stratify with cooler water at the base and hot water at the top. A narrow and sharp transition layer of water forms between the regions of warm and cold water.

Suppose there is a party and you are not likely to make ice when people arrive. You would buy ice, store it in a freezer and use it when required. The process of thermal energy is very much similar. The electricity you utilize to make that ice is less expensive at night than during the daytime.

How does thermal storage energy work?

Ice is formed uniformly in the ice bank tank via counterflow heat exchanging tubes. As ice is made, the water still flows freely which prevents damage to the tank. The ice bank tank takes between six and 12 hours to charge completely.

On peak hours during the daytime, the glycol solution circulates via the ice storage tank to deliver the stored energy to the building to augment electric chiller cooling. The cold glycol gets delivered at a proper temperature to the cooling coil in the air.

The fan blows air on the coils to supply cooling to the occupant spaces. People feel cold and never know that ice storage is being used to save money on the cost of cooling.