Consider the image given below. The column is filled with water and the ends of each column A and B have been blocked by a piston. If piston A is pressed, what do you think will happen to piston B? Piston B is going to rise up. We have just applied Pascal’s law to our fluid pressure. Let us learn what is Pascal’s law? 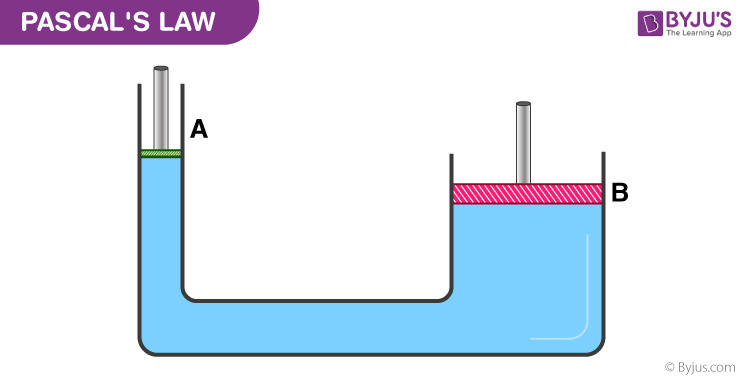 What is Pascal’s Law?

According to Pascal’s law,

“The external static pressure applied on a confined liquid is distributed or transmitted evenly throughout the liquid in all directions”.

The static pressure acts at right angles to any surface in contact with the fluid. Pascal also found that the pressure at a point for a static fluid would be the same across all planes passing through that point in that fluid. Pascal’s law is also known as Pascal’s principle or principle of transmission of fluid-pressure. In 1653, Pascal law was stated by French mathematician Blaise Pascal.

Following is the formula of Pascal law:

Let us understand the working principle of Pascal’s law with an example.

A pressure of 2000 Pa is transmitted throughout a liquid column due to a force being applied on a piston. If the piston has an area of 0.1 m2, what is the force applied?

This can be calculated using Pascal’s Law formula.

Consider an arbitrary right-angled prismatic triangle in the liquid of density rho. Since the prismatic element is very small, every point is considered to be at the same depth from the liquid surface. The effect of gravity is also the same at all these points. 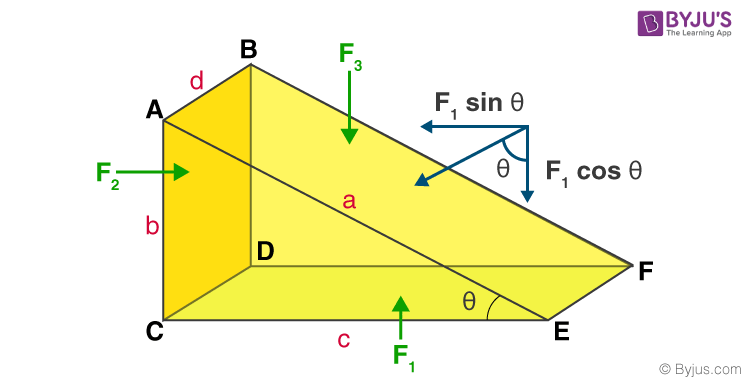 Let ad, bd, and cd be the area of the faces ABFE, ABDC, and CDFE respectively.

The net force on the prism will be zero since the prism is in equilibrium.