Huygens principle proposed by Christiaan Huygens In 1678 revolutionised our understanding of light and its characteristics. You may be familiar with the rectilinear light theory that suggests light travels along straight paths. Huygens principle is one of the key methods for studying various optical phenomena. In this article, we will learn the Huygens principle and its advantages and disadvantages in detail.

Huygens principle is a method of analysis applied to wave propagation problems both in the far-field limit and near-field diffraction and reflection. It states that:

However, this theory did not explain why refraction occurred in the first place. Secondly, it could not explain how light carries energy as it travels.

Huygens stated that light is a wave propagating through space like ripples in water or sound in air. Hence, light spreads out like a wave in all directions from a source. The locus of points that travelled some distance during a fixed time interval is called a wavefront. Thus, from a point source of light, the locus of points that light has travelled during a fixed time period is a sphere (a circle if you consider a 2D source). 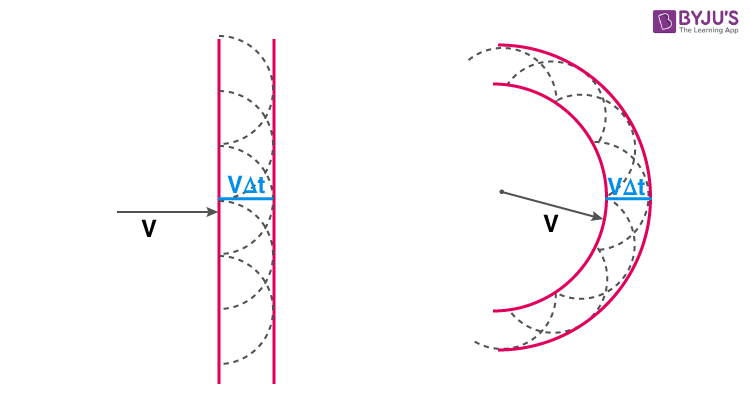 Huygens’s theory explains the wave theory of light phenomena of diffraction, interference, reflection, and refraction well, considering it was proposed two centuries ago. (The former two phenomena were not even discovered until the 19th century).

If a stone is thrown into the river, it will create waves around that point in the form of ripples which are circular in nature, called a wavefront.

When light passes through an aperture, every point on the light wave within the aperture can be viewed as a source creating a circular wave that propagates outward from the aperture. The aperture thus creates a new wave source that propagates in the form of a circular wavefront. The centre of the wavefront has greater intensity while the edges have a lesser intensity. This explains the observed diffraction pattern and why a perfect image of the aperture on a screen is not created. A daily life example of this phenomenon is common. If someone in another room calls toward you, the sound seems to be coming from the doorway.

Advantages and Disadvantages of Huygens Principle

Why does the sound bend around the corner of a building while light does not?

Under what conditions does light behave like a wave and as a particle?

Is the fuzzy edges on your shadow a result of diffraction?

Diffraction bends the path of light waves near sharp edges. Some light is scattered into the region we expect to find dark, blurring the shadow boundary.

Why is the Huygens Principle important?

Can we apply the Huygens principle to radar waves?

As the Huygens principle is a universal principle relating to wavefront formation, it can be applied to radar waves.

Who proposed the Huygens principle?

What are the key conclusions of the Huygens principle?

All points on the wavefront could be taken as the origin of secondary spherical wavelets which travel in the forward direction at light speed. The new wavefront is, in fact, the tangential surface of every one of these secondary wavelets. So, it is also a geometrical method to calculate the wavelength.

What are the main drawbacks of the Huygens principle?

What are the advantages of the Huygens principle?

The Huygens principle easily proved the refraction and reflection of light. The concepts such as diffraction of light and interference of light can also be proved by Huygens.

What is the refraction of light?

It is a phenomenon through which light beams bend and move from one transparent material to another.

Who proposed the wave theory of light?

What is the diffraction of light?

Diffraction of light is the bending of light around the edges of a body such that the light rays spread out and illuminate the regions where shadows are typically expected. Generally, it is hard to distinguish diffraction from interference as both happen simultaneously.

What is the interference of light?

Now, you have an idea of what Huygen’s principle states. If you wish to learn more physics concepts with the help of interactive video lessons, download BYJU’S – The Learning App.
Test Your Knowledge On The Huygens Principle And The Principle Of A Wave Front!
Q5