The eye is an important and one of the most complex sensory organs that we humans are endowed with. It helps us in visualizing objects and also helps us in light perception, colour and depth perception. Besides, these sense organs are pretty much similar to cameras, and they help us see objects when light coming from outside enters them. That being said, it is quite interesting to understand the structure and working of the human eye. It also helps us in understanding how a camera actually functions. Let’s have a glance at the human eye – its structure and functions.

A human eye is roughly 2.3 cm in diameter and is almost a spherical ball filled with some fluid. It consists of the following parts:

At the junction of the optic nerve and retina, there are no sensory nerve cells. So no vision is possible at that point and is known as a blind spot. 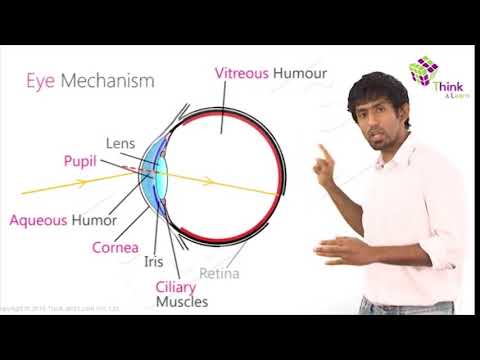 Function of the Human Eye

As we mentioned earlier, the eye of a human being is like a camera. Much like the electronic device, the human eye also focuses and lets in light to produce images. So basically, light rays that are deflected from or by distant objects land on the retina after they pass through various mediums like the cornea, crystalline lens, aqueous humor, the lens, and vitreous humor. 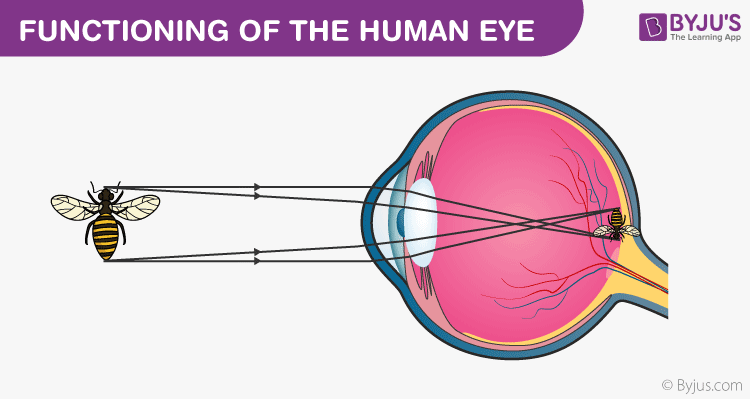 The concept here though is that as the light rays move through the various mediums, they experience refraction of light. Well, to put it in simple terms, refraction is nothing but the change in direction of the rays of light as they pass between different mediums. The table below shows the refractive indices of the various parts of the eye. 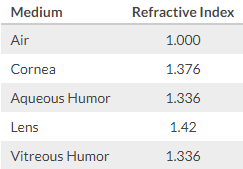 Having different refractive indexes is what bends the rays to form an image. The light rays finally are received and focused on the retina. The retina contains photoreceptor cells called rods and cones and these basically detect the intensity and the frequency of the light. Further, the image that is formed is processed by millions of these cells, and they also relay the signal or nerve impulses to the brain via the optic nerve. The image formed is usually inverted but the brain corrects this phenomenon. This process is also similar to that of a convex lens.

In any case, now that we have learned something about the human eye, each eye is very important, and they play a distinct part in helping humans to see.

Some of the sensory organs of the human body are eyes, ears, nose, tongue, and skin.

What are the parts of the human eye?

Parts of the human eye are:

What is blind spot?

The junction of the retina and optic nerve where no sensory nerve cells are found is known as blind spot. No vision is possible at the blind spot.

Lens is a transparent structure found behind the pupil.

What are the types of optic nerves?

Two types of optic nerves are:

Stay tuned with BYJU’S to learn more about other concepts of Physics with interactive videos.