Many people often get confused between temperature and heat. Suppose mistakenly you touch a hot object. How would you explain to someone how hot it was? What is the measure for the hotness? Yes, it is the temperature impact. The heat comes under the class of forms of energy whose unit is Joules. Temperature is the measure of heat i.e. the more heat you give, the temperature will increase. 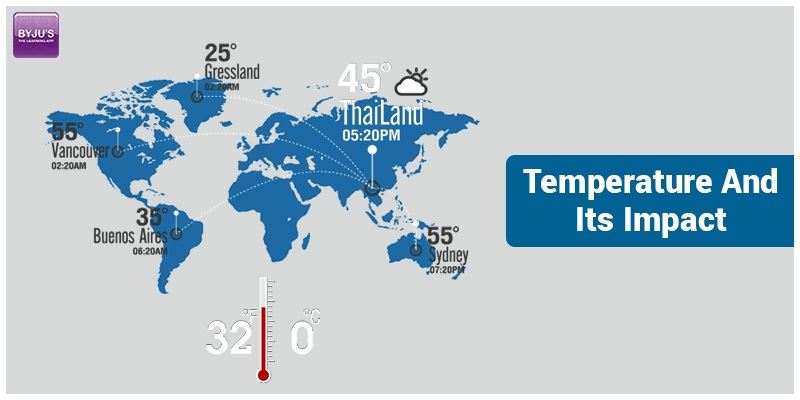 Temperature is defined as the measurable extent of hot or cold. It is a mathematical representation of heat.  But it is not merely a quantitative measure; temperature impact also represents the flow of energy as well as molecular motion (motion of atoms and molecules within a substance). Thermometer (thermos: hot; metron: measure)is the universal instrument used to measure temperature. Different units of temperature are Celsius (˚C), Kelvin (K), and Fahrenheit (˚F). It is a factor which has varying impact on different processes and physical properties. One of the examples of the influential impact of temperature is the increase or decrease of a substance’s solubility as the temperature changes. The interdependence of temperature and Kinetic Energy of molecules is the best reason for the same.

As per the principles of Thermodynamics, the flow of heat generally occurs from a high-temperature region to a low-temperature region. Thus, coldness is a myth which is just an absence of heat. The kinetic energy due to the higher temperature will contribute to a small expansion of volume. This is called thermal expansion which is the basic working principle of thermometers.

Rising Temperature and its Effects

Earth is the only planet in the solar system where life form is known to exist. This is due to various factors including the Earth’s position relative to the sun. Earth is capable of maintaining a stable average temperature on its surface that allows for the existence of warm, flowing water on its surface, and conditions favorable to life. Lately, the earth is getting warmer. The thermometer reading all over the world has steadily risen since the industrial revolution. Global warming is significantly affecting our communities, health, and climate. We are affected by the rise in temperature as follows:

These impacts will continue to intensify and grow over time unless we take immediate action to reduce global warming.

Test your knowledge on Impact of temperature
Q5