Improvements in Technology For Using Conventional Sources of Energy

We need energy to walk, talk, sing, eat and even to move from one place to another. The capacity to do the work is known as energy. There are many kinds of energy like nuclear energy, thermal energy, chemical energy, kinetic energy, mechanical energy, geo-thermal energy, potential energy and many more. We also know that energy can neither be created nor be destroyed as per the law of conservation of energy. Energy is classified into various forms depending on different criteria. Let us know how energy is classified based on the source.

Based on the source, energy is classified into:

The commercial form of energy: This form of energy is available to users upon paying and buying it. Example: coal, electricity, oil and natural gas.

In this article, let us learn about improvements in technology for using conventional sources of energy.

From ancient times dung cakes and firewood have been the source of energy for cooking and fueling various sources. Dung cakes are the bi-product of plants and animals and are referred to as biomass. Cow-dung cakes, when burnt, release enormous amounts of smoke and lead to pollution. Compared to other sources of energy, the heat released by cow dung is less.

Charcoal is the residue product obtained when the wood is burnt in a limited supply of oxygen. Charcoal has the ability to produce heat without producing flames and is smokeless. It has a higher heat generation efficiency.

Residue materials obtained after harvesting the crops along with vegetable waste and sewage are decomposed in the absence of oxygen to obtain biogas. Since the base material for the production of biogas is cow-dung, it is known as gobar gas. The below figure shows the plant used to produce biogas. The biogas plant is a dome-like structure constructed with bricks. A mixture made of cow-dung and water is made in the mixing tank. This mixture or slurry is fed into the digester. No oxygen is present in the digester, which is a sealed chamber. Anaerobic microorganisms which are used for decomposing complex compounds of the slurry do not require the presence of oxygen. Decomposition process takes a few days to be complete and to generate gases like hydrogen, hydrogen sulphide, methane and carbon dioxide. The gas tank above the digester is used to store the biogas and is withdrawn through the pipes.

Windmill is as shown in the figure below. 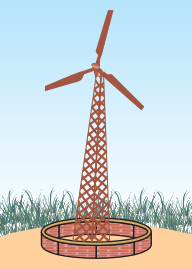 A windmill consists of a structure similar to a large electric fan that is erected at some height on a rigid support. In the production of electricity, the rotatory motion of the windmill is used to turn the turbine of the electric generator. The output of a single windmill is small and cannot be used for commercial purposes. Hence, wind energy farms are created with more number of windmills over a large area. The energy output of each windmill on a farm is coupled together to get electricity on a commercial scale.

Wind energy farms can be set up in places where the wind blows for the greater part of a year. The wind speed should also be higher than 15 km/h to maintain the required speed of the turbine. Back-up facilities like storage cells are included to store energy when there is no wind. Wind energy farms need a large area of land to set up. For a 1 MW generator, the farm needs about 2 hectares of land. The tower and blades are exposed to natural calamities like sun, storm, rain, and cyclone; they always require a high level of maintenance.

Advantages of Biogas and Wind Energy

1. What are the two types of conventional sources of energy?

2. List the examples of a non-commercial form of energy.

3. What are conventional sources of energy known as?

4. What does the fermentation of biomass produce?

5. Which gases is biogas composed of?

Biogas is composed of 75% of methane and 25% of carbon dioxide along with hydrogen sulphide, hydrogen and nitrogen.