Magnetic Field on the Axis of a Circular Current Loop

Magnetic Field on the Axis of a Circular Current Loop – Derivation

Now let us learn the derivation of a magnetic field on the axis of a circular current loop. Let us evaluate the magnetic field due to a circular coil along its axis. The evaluation requires summing up the effect of minute current elements (I dl). (I) is the steady current and the evaluation is carried out in a vacuum or free space.

x = distance P from the center O of the loop.

dl= a conducting element of the loop.

Any element of the loop will be perpendicular to the displacement vector from the element to the axial point.

For example, the element dl present in the figure is in the y-z plane. Whereas, the displacement vector r from dl to the axial point P is in the x-y plane.

A null result is obtained when the components perpendicular to the x-axis are summed over, and they cancel out.

The \(dB_{\perp}\) component due to dl is cancelled by the contribution due to the diametrically opposite dl element. This is represented in the above figure.

Hence, only the x-component survives. The net contribution along the x-direction can be obtained by integrating \(dB_{x}\) = dB cos θ over the loop.

The summation of elements dl over the loop yields 2πR, the circumference of the loop. Thus, the magnetic field at P due to the entire circular loop is

When x=0, we may obtain the field at the center of the loop

Since the circular wire forms a closed loop, the magnetic field lines are produced as shown in the figure below. 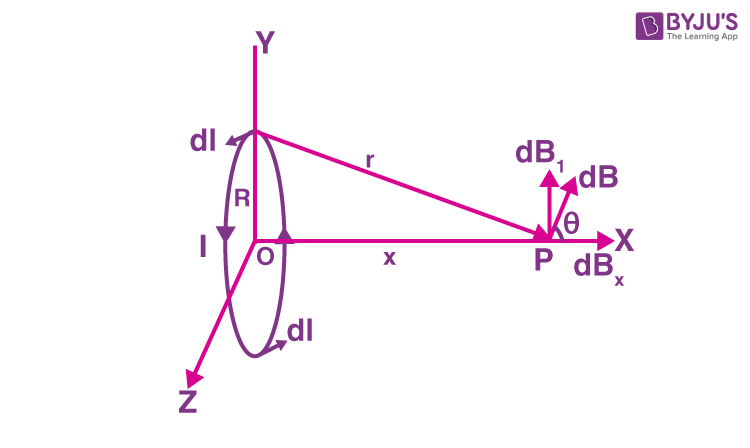 The direction of the magnetic field created is given by the right-hand thumb rule.

1. A circular coil of wire has 100 turns of radius 12 cm, and carries a current of 1 A in a clockwise direction when viewed from the right side. Find the magnitude and direction of the magnetic field:

i) at the center of the coil, and

Magnetic field at the center of the circular coil is given by:

To learn about magnetic fields due to circular loops, click on the video below. 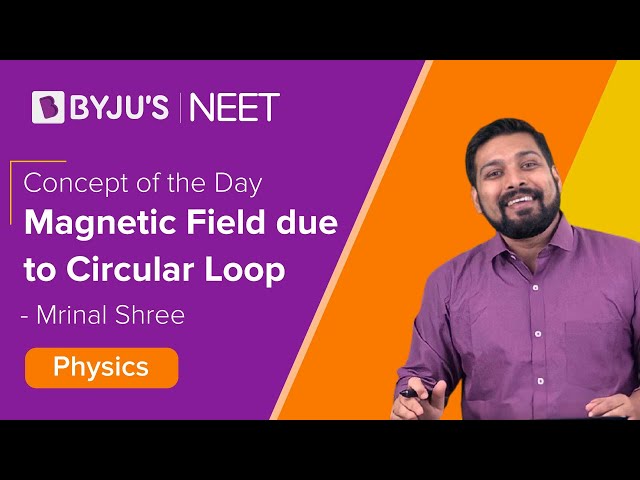 The equation that gives the magnetic field produced by a current-carrying segment.

It is one of the fundamental forces that deals with the physical interaction between electrically charged particles. The electromagnetic force acts between charged particles and is the combination of all magnetic and electrical forces.

Give the equation for the magnetic field on the axis of a circular current loop.

Is the current carrying element considered a scalar or vector quantity?

The current-carrying element is considered a vector quantity.