Sound Produced By Vibration Of Objects

Where words cannot be heard, music speaks. Music and sound are part of our everyday life. A sound is a form of energy that gives us hearing experience. We see objects around us with the help of eyes by detecting light from objects. In the same way, ears are used to detect sound. The sound is produced by the vibration of objects and is propagated through a medium from one location to another.  The to and fro or back and forth motion of an object is termed as vibration. The motion of objects causes vibrations. In many cases, we can see the vibrations with our naked eyes. While in some cases their amplitude is so small that we cannot see them but can experience them.

Examples of Sound Produced by Vibration of Objects

Let us understand the concept of sound produced by the vibration of an object with an example. We might have seen people playing the guitar. In guitar when they pluck the strings of a guitar, it vibrates and produces sound. The sound produced by it travels through the air which acts as the medium. 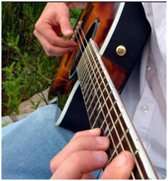 Another example to explain Sound Production by vibrating objects in a tuning fork. A fork consists of two tines and a handle. When it is hit with a rubber hammer, the two tines start vibrating. The back and forth motion of tines produce disturbances in the surrounding air molecules. As the tines extend outward from their original position, they compress surrounding air molecules which result in the creation of a high-pressure region close to the tine. When the tine moves inwards, it produces a low-pressure region near the tine. With more vibrations of tine, an alternating pattern of high and low-pressure regions is created. These pressure difference regions help in the propagation of sound waves from one location to another.

The sound produced is transmitted through pressure waves within the object. An object vibrating back and forth rapidly pushes air forward to make way for itself. When a force is applied on an atom, it moves from its original position and exerts a force on the adjacent atom. This motion from one particle to another continues throughout the medium. In this manner, the sound is transmitted through a medium. 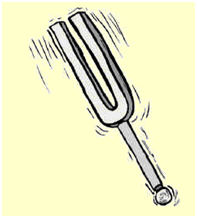