It was first developed in 1935 by Max Steenbeck in Germany to accelerate electrons, but the concepts ultimately originate from Rolf Widerøe, whose development of an induction accelerator failed due to the lack of transverse focusing. In 1940, the successful betatron was developed at the University of Illinois by the American physicist Donald W. Kerst. A simple representation of the betatron is shown in the figure below. 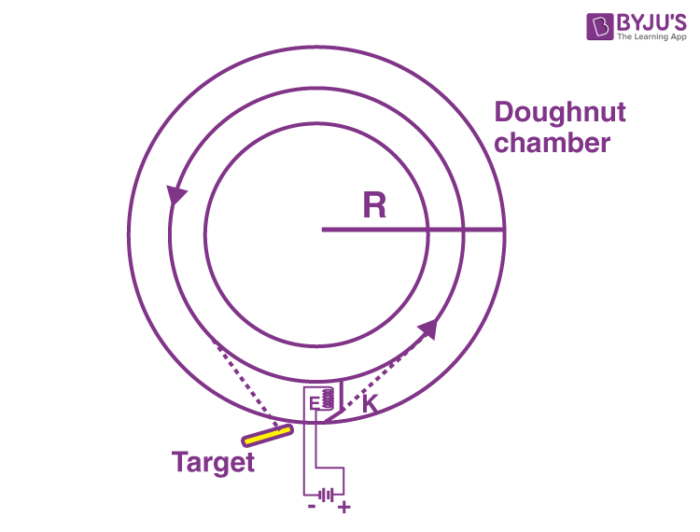 Hill’s Equation describes this type of traverse motion by:

Some applications are stated below:

This type of particle has maximum energy, and can be limited by the strength of the magnetic field due to the saturation of iron and by the practical size of the magnet core.

It is actually a transformer, which acts as the secondary coil of the transformer. This accelerates the electrons in the vacuum tube around a circular path. It works under constant electric fields and variable magnetic fields.

What is a particle accelerator?

It is a machine that uses electromagnetic fields to drive high-speed, high-energy charged particles in well-defined beams.

What are the types of particle accelerators?

The following are the types of particle accelerators:

What are the types of electrodynamics or electromagnetic particle accelerator?

Following are the types of electrodynamics or electromagnetic particle accelerator:

Betatron is an example for which type of accelerator?

Betatron is an example of an electrodynamics or electromagnetic particle accelerator.

True.
Hope you have understood about betatron and its applications. Stay tuned with BYJU’S to know about various interesting topics!.
Test your knowledge on Betatron
Q5