We normally use a stove or an oven for cooking vegetables, meat and rice. Using a solar cooker, we cook the same things, but by using sunlight instead of gas or electricity. In the article, let us discuss the working and construction of a solar cooker.

Sunlight isn’t hot in and of itself. It is radiation generated by fluctuating electric and magnetic fields. The sunlight to heat conversion occurs when the photons of light waves interact with molecules of the substance. The electromagnetic radiation emitted by the Sun possesses energy in them. When they strike, the energy causes the molecules of the matter to vibrate. The molecules get excited and jump to higher levels. This activity generates heat.

A mirror surface with high specular reflection is used to concentrate and channelise light from the sun into a small cooking space. The sunlight can be concentrated by several orders of magnitude, producing magnitudes high enough to melt salt and metal. For household solar cooking applications, such high temperatures are not required. Solar cookers available in the market are designed to achieve temperatures of 650C to 4000C.

The concentrated sunlight is focused onto a receiver such as a cooking pan. The interaction between the light energy and the receiver material helps to converts light into heat by a process called conduction. The conversion is maximised by making use of materials that conduct and retain heat. Pots and pans used in solar cookers should be matte black in colour to maximise the absorption.

The occurrence of convection is reduced by isolating the air inside the cooker from the air outside. Using a glass lid on the pot enhances light absorption from the top of the pan and decreases the convection energy loss along with improving heat holding capacity of the cooker. The glazing taps the incoming sunlight but is opaque to escaping infrared thermal rays.

A box-type solar cooker consists of the following components: 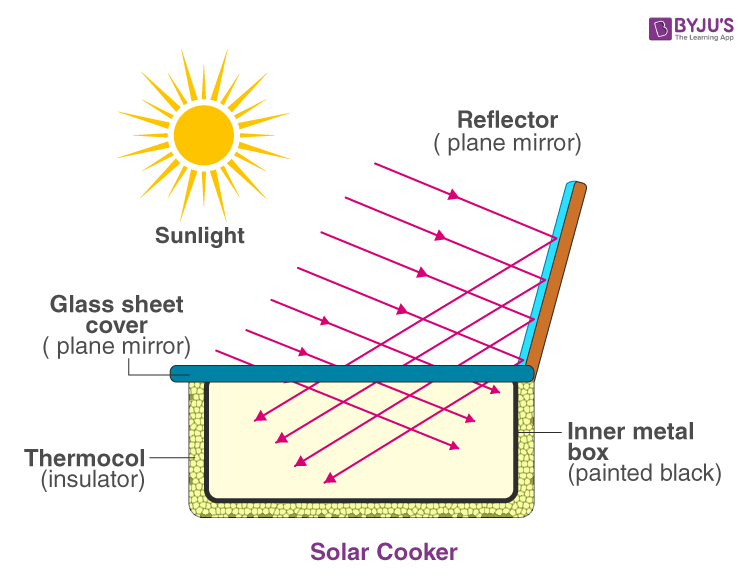 The food absorbs heat from the black surface and gets cooked. The thick glass sheet does not allow the heat to escape and thus, helps in raising the temperature in the box to a sufficiently high degree to cook the food.