When you throw a ball up into the air, why doesn’t it fly through the atmosphere and escape into outer space? This is because gravity pulls it back down. Then how does a rocket fly into outer space? It can fly into outer space because it is travelling at a very high velocity. This velocity is called escape velocity. The escape velocity of celestial bodies like planets and their natural satellites (the moon for us) is the minimum velocity that has to be achieved by an object, to escape the gravitational sphere of influence (pull or force or attraction) of the celestial body. At this velocity, the sum of the gravitational potential energy and kinetic energy of the system will be equal to zero.
Table of Contents:

What is Escape Velocity?

Escape velocity is defined as the speed at which an object travels to break free from either the planet’s or moon’s gravity and leave without any development of propulsion.

The escape velocity equation is obtained by equating the kinetic energy of an object with mass m and travelling with a velocity of v and gravitational potential energy of the same object.

From this relation, it is obvious that escape velocities for larger planets (or celestial bodies) is greater since it will have a larger mass compared to smaller planets with a lower mass (having less gravity in comparison).

This video helps you understand the concept of escape velocity clearly. 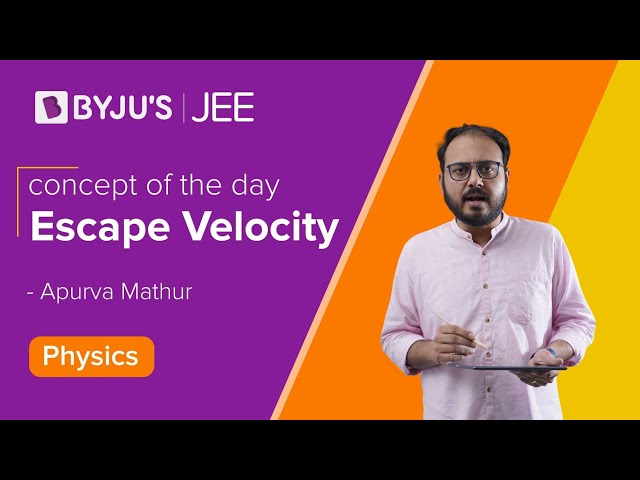 The following is the table with an escape velocity of different celestial bodies:

What does escape velocity depend on?

Escape velocity depends on the mass and radius of the celestial body.

What is the difference between orbital velocity and escape velocity?

How is escape velocity and orbital velocity related?

In our solar system, which planet has the highest escape velocity.

In our solar system, which planet has the lowest escape velocity.

Test your knowledge on The Escape Velocity Of Earth
Q5