Using a simple pendulum, plot L-T and L-T2 graphs and use it to find the effective length of a second’s pendulum using appropriate graph

Using a simple pendulum, plot L-T and L-T2 graphs and use it to find the effective length of the second’s pendulum.

The simple pendulum exhibits Simple Harmonic Motion (SHM) as the acceleration of the pendulum bob is directly proportional to the displacement from the mean position and is always directed towards it. The time period (T) of a simple pendulum for oscillations of small amplitude, is given by the relation 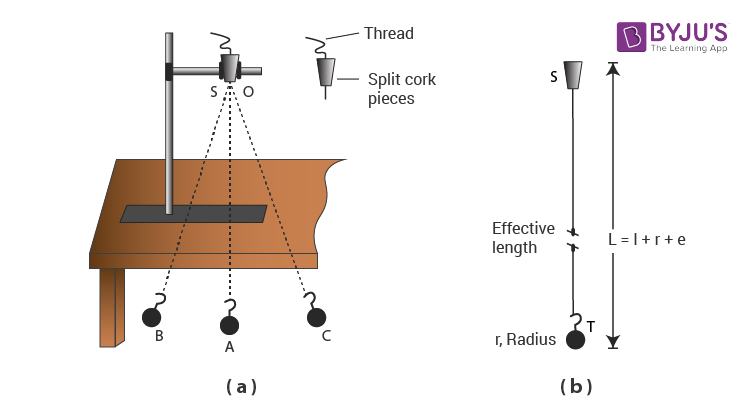 Plot a graph between L versus T from observations recorded in the table above, taking L along x-axis and T along the y-axis. You will find that this graph is a curve, which is part of a parabola as shown in Figure 1.

Plot a graph between L versus T2 from observations recorded in the table, taking L along the x-axis and T2 along the y-axis. You will find that the graph is a straight line passing through the origin as shown in figure 2.

(iii) From the L versus T2 graph, determine the effective length of the second’s pendulum for T2 = 4s2.

The graph L versus T is curved, convex upwards.

The graph L versus T2 is a straight line.

The effective length of the second’s pendulum from the L versus T2 graph is … cm.

Answer: A pendulum is defined as a single isolated particle suspended by a weightless Flexible and inextensible string with frictionless support.

Why is the word ‘simple’ used in simple pendulum?

Answer: Because the simple pendulum consists of mass m hanging from a string of length l and fixed at a pivot point P. The pendulums used in the wall clocks are known as a compound pendulum, and they have a metallic string instead of a thread.

Answer: A motion is called simple harmonic motion when:

What is the relationship between frequency and time period?

Answer: The relationship between frequency and time period is given by f = 1/T

What is restoring force?

Answer: The force that brings a vibrating body towards the mean position is known as the restoring force.

Can we use a cricket ball in the place of the bob?

Answer: No, we cannot. The bob must be as small as possible.

Can we use a rubber band instead of a thread?

Answer: No, we cannot because it is not inextensible.