This is something which you have heard a hundred times from your teacher but have you ever asked what kind of work has to be accomplished to define energy? Work is said to be done when an object is moved against a force, like gravity.

Energy is a scalar quantity whose SI unit is Joule. Energy is found in many things and thus there are different types of energy. All forms of energy are either kinetic or potential. 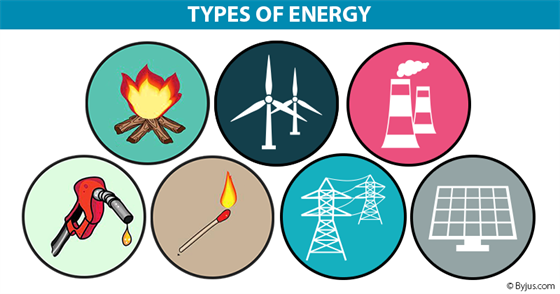 The energy in motion is known as Kinetic Energy. For example a moving ball, flowing water etc.

m = Mass of the object

v = Velocity of the object

This is the energy stored in an object and is measured by the amount of work done. For example: pen on a table, water in a lake etc.

m = Mass of the object (in kilograms)

g = Acceleration due to gravity

Various other forms of energy are as follows –

It is the sum of potential energy and kinetic energy that is the energy associated with the motion & the position of an object is known as Mechanical energy. Thus, we can derive the formula of mechanical energy as –

Chemical energy is stored in a chemical substance in between the bonds of atoms in compounds. In a same given temperature and environment, energy can be released (or absorbed) because of a reaction between a set of chemical substances is equal to the difference between the energy content of the products and the reactants.

Energy sources are used as fuels. Fuels are used in machineries, automobiles, and other industries. They are used in thermal plants to generate electricity. Energy resources can be classified into two types – Non-renewable and Renewable.

Fossil fuels like oil, natural gas and coal are known as non-renewable resources, because once used, this cannot be renewed by natural process or means.

Natural resources like wind, water, solar, and geothermal are called renewable resources as they come from sources that regenerate it back after consumption and are continuously available in nature.

Types of energy based on their resources are :

Test your Knowledge on Types Of Energy
Q5