Why do we feel Weightless?

Weightlessness is a sensation experienced by an individual where there are no external objects touching one’s body. In other words, the sensation of weightlessness exists when all contact forces are removed. These sensations are common to the state of free fall.

During free fall, the only force acting on the body is the force of gravity. As gravity is a non-contact force, it cannot be felt without any opposing force. This is the reason why you feel weightless when in a state of free fall.

It is important to remember that weightlessness is only a sensation and not a reality corresponding to an individual who has lost weight. Weightlessness has a little to do with weight and a lot to do with the presence and absence of contact forces.

Otis L. Evaderz conducted his famous elevator experiment riding the elevator up and down while standing on a bathroom scale. He noticed that the scale reading was different while he was accelerating up and down and while he was at rest or travelling at a constant speed. We know that the scale reading is a measure of the upward normal force, therefore its value can be predicted during various stages of motion. The value of Normal force acting on Otis’s 80-kg body could be predicted if the acceleration is known. This prediction is made by applying Newton’s second law of motion. 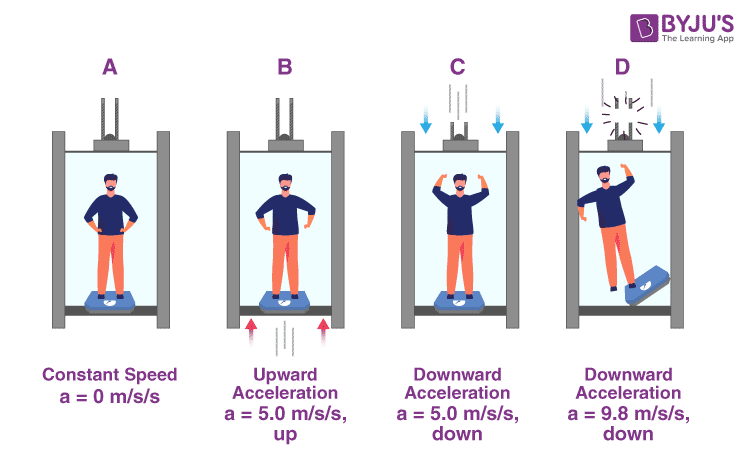 Why do Astronauts Feel Weightless in Space?

Astronauts orbiting in space feel a sense of weightlessness because there is no external contact force in space pushing or pulling upon their bodies. Gravity is the only force acting upon their body. Gravity being an action-at-a-distance force cannot be felt and therefore would not provide any sensation of weight.

Do Astronauts experience Weightlessness because there is no force of gravity in space?

Many students are under the assumption that astronauts feel weightlessness because there is no force of gravity in space. This is not true. If it were true then it would violate the circular motion principles. If a person believes that the absence of gravity in space is the reason for weightlessness then they would have to come up with a reason for how astronauts are orbiting in space?

The force of gravity acting on the astronaut in space is certainly lesser than the gravity on Earth’s surface. But it is not small enough to account for a drastic reduction in weight. Let us consider the space station to orbit at an altitude of approximately 400 km above the Earth’s surface, then the value of g at that location will be reduced from 9.8 m/s2 to approximately 8.7 m/s2. While it certainly reduces weight, it does not account for the absolutely weightless sensations that astronauts experience. Their absolutely weightless sensations are because of the absence of a surface to support them as they are free-falling towards the Earth.

Test Your Knowledge On Weightlessness!
Q5