Alkanes are saturated hydrocarbons with a general formula CnH2n+2. Based on their structure, they are further categorized into linear straight chain alkanes, branched chain alkanes and cycloalkanes. They are odorless, colorless and are insoluble in water. The melting point and boiling point of alkanes increases with increase in molecular weight. The chemical reactivity of alkanes is less as they are highly stable compounds. Alkanes are industrially important as fuels.

Q1. What kind of reactions do alkanes undergo?

Answer: The two most important reactions of alkanes are combustion and halogenation.

Combustion: Alkanes undergo a combustion reaction to give carbon dioxide and water.

Q3. Choose the alkane from the following

Q4. Choose the correct molecular formula of alkane from the following

C4H10 is the alkane butane.

Answer: Alkanes are called saturated hydrocarbons because they do not contain multiple bonds like double bond or triple bond in their structure. The carbon and hydrogen atoms in alkanes are bonded by single covalent bonds.

Q6. What is meant by incomplete combustion?

Q8. What is the bond angle of alkanes?

Q9. Arrange n-pentane, iso-pentane and neopentane in decreasing order of their boiling points.

Q10. Which metal is used in the preparation of grignard reagent from haloalkanes?

Answer: Magnesium metal is used in the preparation of grignard reagent from haloalkanes.

Q11. Give one use of ethylene dibromide.

Answer: Ethylene dibromide is used as an anti-knocking agent in the combustion chambers to prevent the deposition of lead metal.

Answer: The reaction in which 2 moles of alkyl halide react with sodium in presence of dry ether to give alkane is called Wurtz reaction.

Q13. Which compound is most volatile among the following?

Answer: Dichlorodifluoromethane is known as freon-12. It is a colorless gas and is used as a refrigerant and also as an aerosol spray propellant.

Q15. What is the geometry of a methane molecule?

Q1.Which among the following has the highest boiling point?

Q2.What are alkanes also known as?

Q3.What is the product obtained when aluminum carbide is treated with water?

Q4. What is paraffin wax?

Q5.What does petroleum mainly consist of? 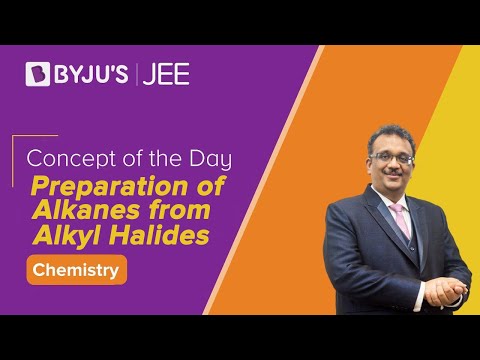