Amines are one of the most important classes of organic compounds which can be derived when we replace one or more hydrogen atoms of an ammonia molecule with an alkyl group.

Q1. Fluorination of an aromatic ring is easily accomplished by treating a diazonium salt with HBF4. Which of the following conditions is correct about this reaction?

Q2. Which amino acid is present only in bacteria and cyanobacteria?

Q3. Which of the following will be most basic in nature?

Q4. Which of the following compound will give secondary amine on the reduction?

Q5. Benzylamine is a stronger base than __.

Correct Answer- (d.) All of the above

Pkb of aniline is more than that of methylamine.

Q7. Arrange the following compounds in the increasing order of basic strengths in their aqueous solutions: NH3, CH3NH2, (CH3)2NH, (CH3)3N

Answer. Basicity order (due to stability of ammonium cation)

Answer. The IUPAC name of the given compound is N, N-diphenylamine.

Q9. Explain why an alkylamine is more basic than ammonia?

Answer. The electron density on the nitrogen atom increases due to the electron releasing inductive effect (+1) of the alkyl group, and thus it can donate the lone pair of electrons more easily than ammonia.

(a) Aniline is a weaker base than cyclohexylamine.

(b) It is difficult to prepare pure amines by ammonolysis of alkyl halides.

(a) The lone pair of electrons on the N-atom in aniline are delocalised over the benzene ring. The electron density of the nitrogen decreases as a result.

(b) This is because the primary amine produced by ammonolysis acts as a nucleophile, producing additional 2° and 3° alkyl amine.

Q11. Describe the following giving the relevant chemical equation in each case : 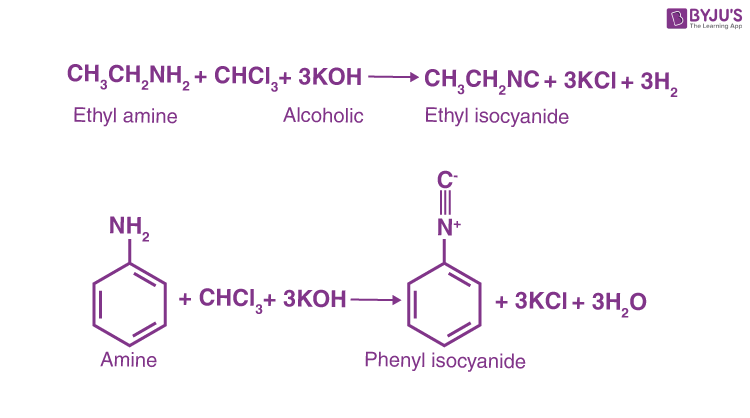 (ii) Hofmann’s bromamide reaction – Formation of amines from amide by the reaction of bromine and sodium hydroxide. The amine formed has 1 carbon less than the amide.

Q12. State reasons for the following :

(i) pKb value for aniline is more than that for methylamine.

(i) This is because the lone pair of electrons on the nitrogen atom become delocalized over the benzene ring and are unavailable for protonation due to resonance in aniline, which is absent in alkylamine, aniline is less basic than methylamine.

Q13. Give reasons for the following:

(i) Aniline does not undergo Friedel-Crafts reaction.

(i) Since aniline is a Lewis base, it reacts with the Lewis acid AlCl3 to form a salt.

As a result, the N of aniline gains a positive charge, acting as a strong deactivating group for the electrophilic substitution reaction. As a result, aniline does not undergo the Freidel Crafts reaction.

Q14. Explain why amines are more basic than amides?

Answer. Amine is more basic than amides as there is an unshared electron pair on the localised nitrogen atom available for protonation. Whereas in amides, the electron pair is delocalised to the carbonyl group through resonance.

Q15. Give the differences between an amine, amide and imine?

Ammonia conjugate bases, such as potassium amide, KNH2, which is unknown in aqueous solution but known in liquid ammonia. Normally, the context will determine which amide is intended, and in organic chemistry, the acid derivative (the former) is usually specified.

An imine, on the other hand, RC(= NR’)R is a carbonyl derivative formed by the condensation of a carbonyl and an amine.

Q1. Amines are the derivatives of:

Q2. The structural formula of methylamino methane is-

Q3. Which element is contained by both amines and amides?

Q4. What are examples of amines?

Q5. Give some uses of amines. 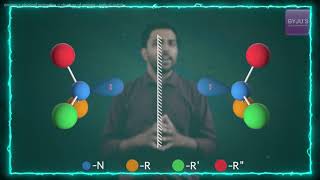 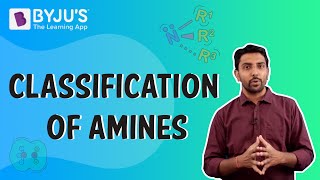