What is Ammonium Ion?

“Ammonium is a polyatomic cation with a chemical formula

A cation is an electron-deficient species that carries a positive charge. A polyatomic ion, also known as a molecular ion, is a covalently bonded set of two or more atoms or a metal complex that can be thought of as a single unit and has a net charge that is greater than zero.

In the case of ammonium, four hydrogen atoms are bonded to one central nitrogen atom, with a total charge of +1. 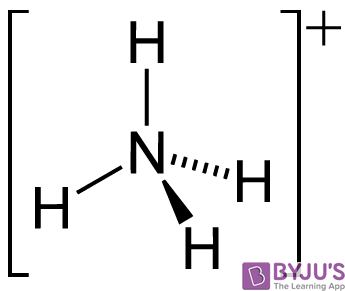 “When a neutral ammonia compound NH3 is protonated or takes on an additional positively charged hydrogen atom, an ammonium ion is formed.”

In ammonia, nitrogen is a central atom with 5 electrons in its valence shell, 3 of which are shared with 3-H atoms, and 1 lone pair of electrons complete the valence shell configuration.

It is an electron-rich species (nucleophile) because it has one lone pair electron (unshared electron pair) and can donate this electron pair to another atom (electrophile). As a result, ammonia is a donor, and when the Ammonia atom donates its lone pair to the proton ammonium ion is formed.

Being polar covalent bonds, all four N–H bonds are equivalent. The ion is isoelectronic with methane and borohydride and has a tetrahedral structure. 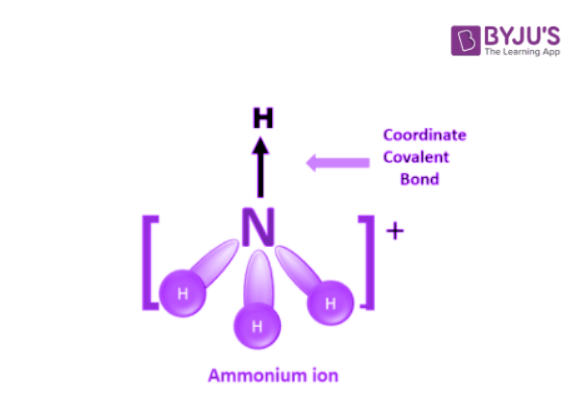 1. Ammonium salts are all white and soluble in water.

2. Chemically, the ammonium ion behaves similarly to the ions of alkali metals, particularly the potassium ion, which is nearly the same size.

3. Since it degrades in water to form ammonia and a hydrogen ion, the ammonium ion acts as a weak acid in aqueous solutions.

How to Detect Ammonium Ion?

Ammonium ions in a solution can be identified by adding a dilute sodium hydroxide solution and gently heating it. Ammonium ions will be converted to ammonia gas if they are present. Ammonia has a distinct choking odour. It also blues damp red litmus paper and damp universal indicator paper.

Why is ammonium an ion?

When an ammonia molecule, NH3, reacts with a proton, H+ cation, the unshared or lone pair of electrons in the N-atom form a coordinate or dative bond with the H+, forming an ion, which is known as ammonium ion.

What is the formal charge on ammonium ion?

The formal charge on ammonium ion is +1.

Which test is a confirmatory test for ammonium ion?

Where are ammonium ions found?

Is ammonium ion acidic or basic?