What is Heat Capacity?

The heat capacity of a substance can be defined as the amount of heat required to change its temperature by one degree.

Thermodynamics in its totality is concerned about heat. The meaning of heat today is energy in transit. Before the development of thermodynamic laws, the heat was considered as the measure of an invisible fluid, caloric, present in any matter. The capability of a substance to hold this fluid was then referred to as the heat capacity of that substance. The development in thermodynamics and dependence of heat transfer on temperature changed the definition of heat.

Modern thermodynamics defines heat as the measure of the total internal energy of a system. In order to quantify the heat energy associated with matter and its dependence on temperature, two properties were defined. These properties were named as specific heat capacity and heat capacity of the system. 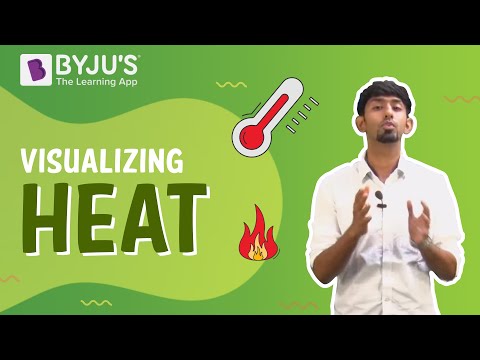 Where Q is the heat energy required to bring about a temperature change of ΔT and C is the heat capacity of the system under study.

Scientists needed a quantity that has no dependence on the quantity or size of matter under consideration for thermodynamic studies this made them define specific heat capacity. It is an intensive property as it is independent of the quantity or size of the matter. Specific heat capacity for any substance or matter can be defined as the amount of heat energy required to raise the temperature of a unit mass of that substance by one degree Celsius. Mathematically it is given as:

Here Q is the amount of heat energy required to change the temperature of m (kg) of a substance by ΔT, s is the specific heat capacity of the system.

What is specific heat in chemistry?

The amount of energy needed to increase the temperature of 1 gram of a material by 1 °C is known as its specific heat.

Why is specific heat important?

Water’s high specific heat capacity makes it suitable for central heating systems because it can transfer a lot of energy by heating while its temperature changes just slightly.

Which metal conducts heat the fastest?

Copper and aluminum have the highest thermal conductivity of the common metals, while steel and bronze have the lowest. When determining which metal to use for a particular application, heat conductivity is a crucial factor to consider.

What materials heat up the fastest?

The aluminum conducted heat the longest, taking 14 seconds on average. At 16 seconds, the bronze medallist was the second fastest. The silver nickel took 19 seconds on average to conduct heat and proved to be the most resilient metal in the experiment, as it did not melt or bend.

How is heat capacity used?

Heat capacity, also known as thermal capacity, is a physical property of matter defined as the amount of heat needed to cause a unit change in temperature in a given mass of material. The molar heat capacity is determined by dividing the heat capacity by the sum of substance in moles.

Join BYJU’S for the most simplified approaches to your problems. Make learning simple.

Take up a quiz on Heat Capacity
Q5