The hyperconjugation effect is a long-term phenomenon in which electrons of an alkyl group’s C-H bond are permanently isolated to an unsaturated system atom or an atom with an unshared p orbital. Q1: Hyperconjugation involves the delocalisation of __________

c) Both σ and π bond orbital

Explanation: The delocalisation of the σ-bond orbital is involved in hyperconjugation. It is the stabilising interaction that occurs when electrons in a σ-bond (typically C-H or C-C) engage with a nearby vacant or partially full p-orbital or a π-orbital to produce an extended molecular orbital that increases the system’s stability.

Q2: Larger the number of hyperconjugation structures, the stability of free radicals will __________

Explanation: Free radical stability will increase as the number of hyperconjugation structures increases.

Explanation: Toluene is the compound that can be sulphonated the most easily. Toluene is a colourless, water-insoluble liquid with the scent of paint thinners. It comprises a methyl group with a benzene ring.

Q5: When the contributing structure contains the same number of two-electron bonds as the normal lewis formula, it will be __________.

Explanation: Isovalent hyperconjugation occurs when the contributing structure has the same number of two-electron bonds as the usual Lewis formula.

Q6: Ethene is devoid of any alpha hydrogen so hyperconjugation is not possible.

Q7: Why is Resonance more stable than Hyperconjugation?

Resonance facilitates delocalisation, which lowers a molecule’s total energy as the electrons occupy a larger volume, making resonance molecules more stable than those that do not. These are referred to as stabilised resonance compounds.

Hyperconjugation is a stabilising process that occurs when electrons in a σ-bond (typically C-H or C-C) engage with a p-orbital or a π-orbital neighbouring unoccupied or partially filled to produce an extended molecular orbital that enhances system stability.

Q8: Write a brief note on hyperconjugation with example of propene.

The interaction of electrons in a σ-bond with a nearby vacant or partially filled non-bonding p-orbital, antibonding σ or π orbital, or filled π-orbital to generate an extended molecular orbital that boosts the system’s stability is known as hyper-conjugation.

Hyper conjugation occurs in propene because the sp3 sigma bond orbital and the vacant p-orbital of an adjacent c-atom partially overlap.

One of the −CH3 group’s C-atom C−H bonds can be found in the plane of the pi-bond orbital, resulting in partial overlapping.

Propene’s hyperconjugation structures are shown below: 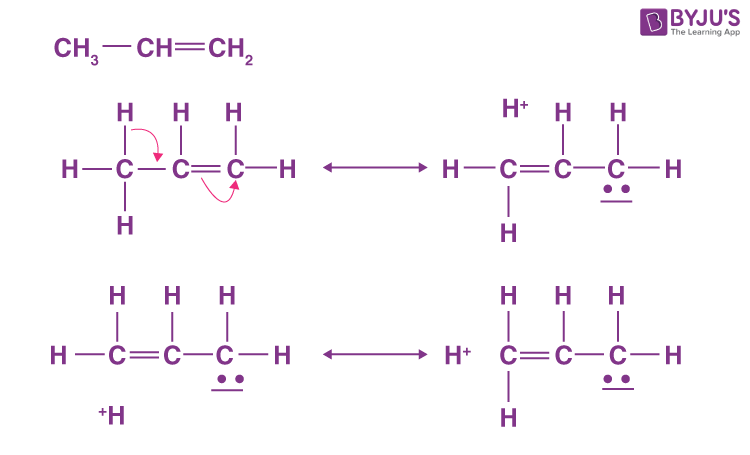 It’s also worth noting that Hyperconjugation is also known as no-bond resonance. Although resonance requires electron delocalisation, it is the electrons that are delocalised in hyper conjugation.

The electromeric effect is a transient effect that occurs when an attacking reagent comes into contact with a multi-bonded organic molecule (a double or triple bond). On the demand of an attacking reagent, a shared pair of π-electrons is completely transferred to one of the atoms connected by numerous bonds in this effect. When the attacking reagent is withdrawn from the reaction’s domain, the effect disappears.

There are two types of electromeric effects.

The transfer of π−electrons from many bonds to the atom with which the reagent is bonded is known as the positive electromeric effect.

The transfer of π−electrons from multiple bonds to the atom with which the reagent does not attach is known as the negative electromeric effect.

Q10: Why Ethers do not show the Hyperconjugation effect?

Compounds with hydrogen linked to the neighbouring carbon of the sp2 carbon do not show hyper conjugation. Those species with the most H will have the most hyperconjugation.

Q11: Mention the applications of Hyperconjugation.

Q12: What is Reverse hyperconjugation?

Q13: In which species Hyperconjugation effect is possible?

Carbocations, free radicals, and alkenes can all undergo hyperconjugation. Nathan and Baker were the first to observe this phenomenon in 1935.

Q14: Hyperconjugation involves the delocalisation of what species?

Q15: What is the difference between Isovalent and Sacrificial Hyperconjugation?

Q1: Number of hyperconjugation structures in isopropyl radical is __________

Q2: Which of the following is a consequence of the Baker-Nathan effect?

b) It is helpful in explaining the relative stability of alkenes

Q4: Is hyperconjugation possible in a triple bond?

Q5: What is the Conjugation effect?