What is Schottky defect?

The Schottky defect (small shot effect) is named after a popular German physicist Walter H. Schottky who was even awarded the Royal Society’s Hughes medal in 1936 for the discovery of this defect.

In his model he explains that the defect is formed in ionic crystals when oppositely charged ions leave their lattice sites which leads to the creation of vacancies. These vacancies are further created to maintain a neutral charge in the crystal. The model further explains that the surrounding atoms also move to occupy these vacancies. Typically, when the defect is found in non-ionic crystals it is referred to as lattice vacancy defect.

Schottky defect is a type of point defect or imperfection in solids which is caused by a vacant position that is generated in a crystal lattice due to the atoms or ions moving out from the interior to the surface of the crystal. 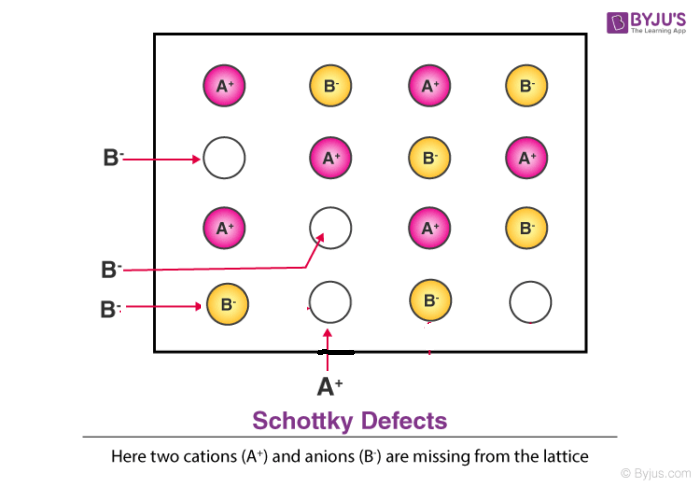 Some distinct characteristics of this defect are; 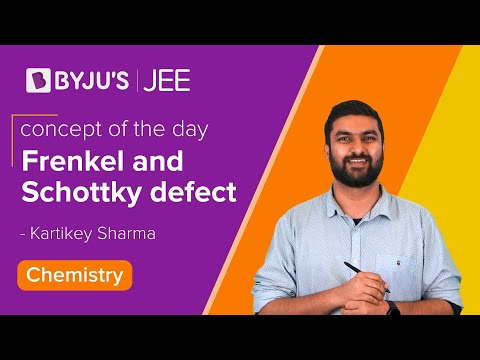 It is a type of defect in crystals that mostly occurs in highly ionic compounds or highly coordinated compounds. The compound lattice has only a small difference in sizes between the anions and cations. Some common example of salts where Schottky defect is prominent include Sodium Chloride (NaCl), Potassium Chloride (KCl), Potassium Bromide (KBr), Caesium Chloride (CsCl) and Silver Bromide (AgBr).

The number of defects for an MX crystal can be calculated by the given formula;

We can calculate N by using the formula;

What is Schottky defect explain with example?

Schottky defect is shown by ionic substances in which the cation and anion are of almost similar sizes. For example, NaCl, KCl, CsCl and AgBr. It may be noted that AgBr shows both, Frenkel as well as Schottky defects.

What is Frenkel and Schottky defect?

What is interstitial defect give example?

For instance, in several common face-centered cubic (fcc) metals such as copper, nickel and platinum, the ground state structure of the self-interstitial is the split [100] interstitial structure, where two atoms are displaced in a positive and negative [100] direction from the lattice site.

What is a defect give example?

What is Schottky defect in a crystal explain with examples?

Schottky defect is a type of point defect or imperfection in solids which is caused by a vacant position that is generated in a crystal lattice due to the atoms or ions moving out from the interior to the surface of the crystal.