What is Sodium Borohydride?

Sodium borohydride is an inorganic compound whose chemical formula is NaBH4. Under normal conditions, this compound exists as a white, powdery solid. NaBH4is a reducing agent which is widely used both industrially and on the laboratory scale. It can be noted that sodium borohydride is also known as sodium tetrahydroborate and sodium tetrahydridoborate.

Sodium borohydride can be prepared on an industrial scale by treating trimethyl borate with sodium hydride at a temperature range of 250-27oC. The balanced chemical equation for this reaction is given by:

Alternately, this compound can also be prepared by reacting borax, metallic sodium, dihydrogen, and silicon dioxide at a temperature of 700oC. This reaction can be represented as follows:

The structure of NaBH4 molecules is illustrated below. 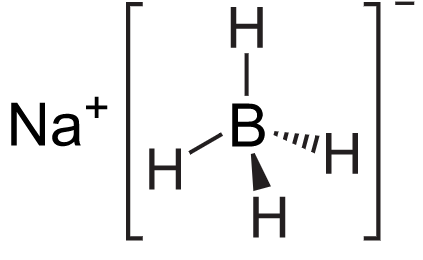 This salt consists of the Na+ cation and the BH4– anion. It can be noted that the BH4– ion has a tetrahedral structure. NaBH4 has three stable polymorphs, namely the α, β, and γ polymorphs.

To learn more about sodium borohydride and other important sodium compounds (such as sodium metabisulfite), register with BYJU’S and download the mobile application on your smartphone.