Spectroscopy means the dispersion of light into component colours. In simple words, it is a method to measure how much light is absorbed by a chemical substance and at what intensity of light passes through it.

As per analytical science, every element or compound has a unique characteristic spectrum. Each compound absorbs and disperses light over a certain range of wavelengths.

Type of interaction between light and material:

In spectroscopy, the type of interaction between light and the material is usually -:

In Chemistry, Spectroscopy helps to study or analyse various chemical compounds or elements, whereas in Physics, it helps to determine the makeup of the atmospheres of planets.

Raman Spectroscopy is a spectroscopic technique which is used to analyse vibrational, rotational, and other low-frequency modes in a system. Raman’s spectroscopy is commonly used in the branch of chemistry to provide a fingerprint by which molecules can be identified. As the name suggests, this phenomenon is named after Sir C. V. Raman. This phenomenon relies on inelastic scattering of monochromatic light which is also known as Raman scattering. The energy of the laser photons shifts up & down due to the interaction of the light with the molecules or phonons of an object. This up down shift of laser photons forms the vibrational modes of an object or system. 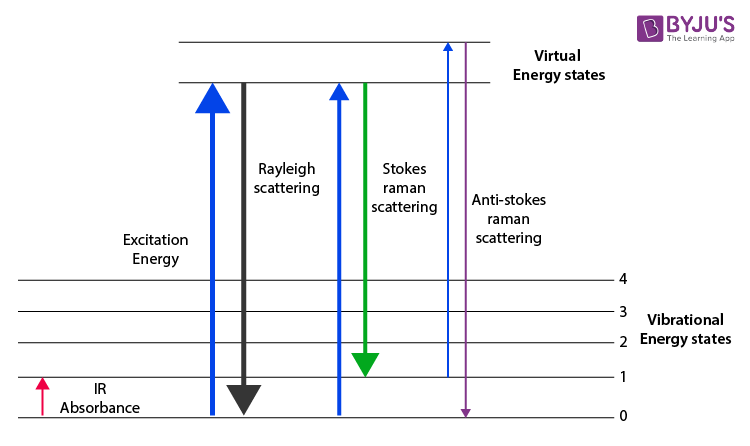 Take up a quiz on spectroscopy
Q5