What is Ammonium Dichromate?

Ammonium dichromate is a flammable inorganic compound with the chemical formula (NH4)2Cr2O7.

Ammonium dichromate is orange-red needles produced during crystallization. A toxic chemical salt used to sensitize organic emulsions such ad gelatin to the hardening effect of actinic light. It is more sensitive to light. 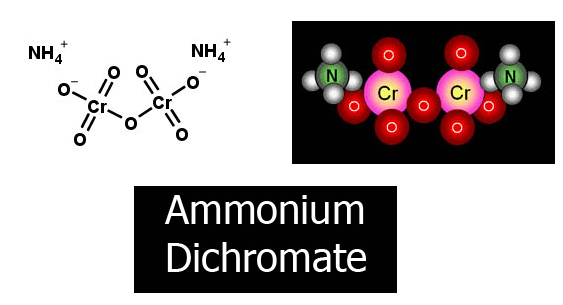 What are the uses of ammonium dichromate?

Ammonium dichromate has been used as a source of pure nitrogen in the laboratory and also as a catalyst in pyrotechnics. This compound also played an important role In the early days of photography as well as in lithography. It is also used in the manufacture of alizarin, chromium alum, leather tanning, and oil purification as a mordant for dyeing pigments.

What happens when ammonium dichromate is heated?

Upon heating, ammonium dichromate decomposes to create nitrogen dioxide, water vapour (Water is gaseous in this reaction due to the relatively high reaction temperature), and solid chromium (III) oxide.

Is ammonium dichromate ionic or covalent?

The ammonium dichromate molecule can be considered as an ionic compound because it features an ionic bond between the ammonium cation and the dichromate anion. However, the individual polyatomic cation and anion are held together by covalent bonds.

NH4HCO3, or ammonium bicarbonate, is a typical leavening agent that produces CO2 without the use of an acid. It doesn’t have the alkaline flavour of baking powder or soda.

Baking soda will react like an acid, resulting in the formation of tiny amounts of sodium ammonium carbonate. When baking soda is combined with an ammonium salt and water, ammonia is produced.