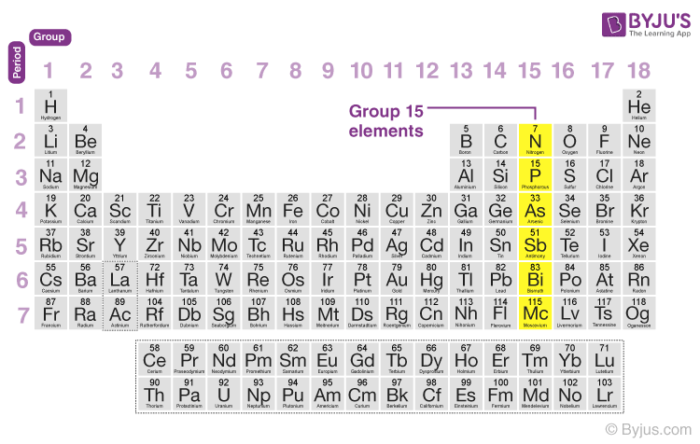 Group 15 elements consist of nitrogen, phosphorus, arsenic, antimony and bismuth. As we move down the group, there is a transition from non-metallic to metallic through metalloid character. The elements nitrogen and phosphorus are non-metals, arsenic and antimony are metalloids and lastly, we have bismuth which is a typical metal. The general valence shell electronic configuration of these elements is ns2np3. The s orbital is completely filled and p orbital is half-filled which makes them stable in nature. The chemical properties of these elements are determined by the oxidation states exhibited by them.

Due to the inert pair effect, the stability of +5 state decreases and +3 state increases as we move down the group in the periodic table. Nitrogen reacts with oxygen and also exhibits +1, +2, +4 oxidation states. On the other hand, phosphorus shows +1 and +4 states in some oxo acids.

Nitrogen has only 4 electrons in its outermost shell (one in s orbital and 3 in p) which is available for bonding, hence it exhibits a maximum covalency of 4. The heavier elements have a vacant d orbital in the valence shell which is used for bonding.

This article deals with the oxidation states of group 15 elements. For any further query install, BYJU’S the learning.