According to the First Law of Thermodynamics, the total energy of an isolated system always remains constant. The first law explains the relationship between the work done by the system or by the system and the heat absorbed without putting any limitation on the direction of heat flow.

The Second Law of Thermodynamics states that no matter what process takes place inside the container, its entropy must increase or remain the same within the limit of a reversible process. This article will help you to know more about entropy and spontaneity.

However, all processes which occur naturally tend to proceed spontaneously in one direction only. What does spontaneity mean here? What factors determine the direction of a spontaneous change?

Naturally, all processes have a tendency to occur in one direction under a given set of conditions. A spontaneous process is an irreversible process and it could only be reversed by some external agents. The entropy of any system is defined as the degree of randomness in it. 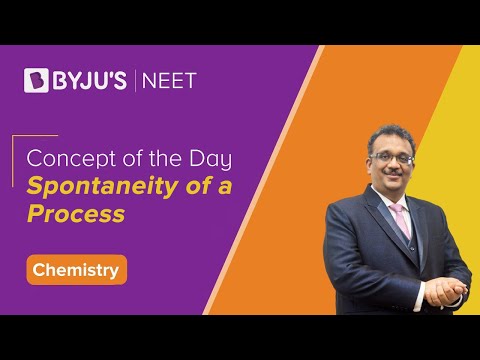 Predicting the spontaneity of a reaction

Generally, the total entropy change is the essential parameter which defines the spontaneity of any process. Since most of the chemical reactions fall under the category of a closed system and open system; we can say there is a change in enthalpy too along with the change in entropy. Since, change in enthalpy also increases or decreases the randomness by affecting the molecular motions, entropy change alone cannot account for the spontaneity of such a process. Therefore, for explaining the spontaneity of a process we use the Gibbs energy change. Gibbs’ energy is a state function and an extensive property. The general expression for Gibbs energy change at constant temperature is expressed as:

ΔHsys = enthalpy change of the system

ΔSsys = entropy change of the system

T = Temperature of the system

This is known as the Gibbs equation.

For a spontaneous process, the total entropy change, ΔStotal is always greater than zero.

ΔSsys = entropy change of the system

ΔSsurr = entropy change of the surrounding

ΔHsurr = change in enthalpy of the surrounding

ΔHsys = change in enthalpy of the system

Also, for a spontaneous process, the total change in entropy is 0, i.e. ΔStotal> 0.

Using the Gibbs equation, it can be said that

Thus, it can be inferred that any process is spontaneous if the change in Gibbs energy of the system is less than zero or else the process is not spontaneous.

Therefore, with the help of the above relation, the spontaneity of a reaction can be easily predicted.

How is a reaction spontaneous?

Which chemical reaction is always spontaneous?

A reaction which is exothermic (ΔH negative) and results in an increase in the entropy of the system (ΔS positive) will always be spontaneous.

Which process is spontaneous?

A spontaneous process is one that occurs on its own, without any energy input from the outside. For example, a ball will roll down an incline; water will flow downhill; ice will melt into water; radioisotopes will decay, and the iron will rust.

A spontaneous process is capable of proceeding in a given direction without needing to be driven by an outside source of energy. An endergonic reaction (also called a nonspontaneous reaction) is a chemical reaction in which the standard change in free energy is positive and energy is absorbed.

To learn more about spontaneity and thermodynamics, register with BYJU’S and download our app – BYJU’S – The Learning App.

Take up a quiz on spontaneity
Q5