In the physics lab, we use many measuring devices to measure various specifications. Some devices used in the lab are voltameter, ammeter, vernier calliper, screw gauge, telescopes and many more. Electricity is measured using devices like ammeter and voltameter. In this article, let us understand and learn about the ammeter and its specification.

Ammeters were laboratory instruments that depended on the earth’s magnetic field for operation. In the 19th century, the ammeter with the ability of accurate measurements, which could be mounted in any position was invented.

Ammeter is a device used to measure either alternating or direct current. We know that ampere is the unit of current. Since this device measures the value in amperes, it’s known as ammeter. 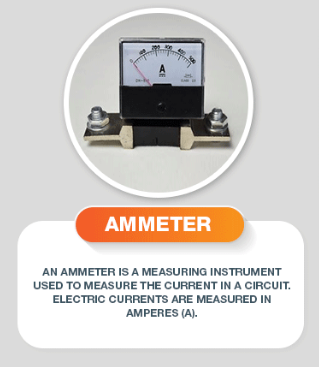 To measure the current, generally the ammeter is connected in series with the circuit. This device is mainly used for measuring a small amount of current, and the current is measured in the milliampere or microampere range. The device which is used to measure the current in milliampere is known as milliammeter, and the device for measuring extremely small electric currents, calibrated in microamperes is called microammeter. In a circuit, the ammeter is represented by the letter “A”.

The device has an inbuilt fuse that protects the device from heavy current. If substantial current flows through the ammeter, the fuse will break. The ammeter cannot measure the current until the new fuse is replaced.

Based on the current passed, it is classified into:

Based on design and construction pattern, the ammeter is classified as:

A permanent moving coil ammeter is also known as a D’Arsonval meter or galvanometer. By noticing the coil’s angular deflection in a uniform magnetic field, the current through a coil can be measured.

In the moving iron ammeter, the coil freely moves between the poles of a permanent magnet. This ammeter can measure both the alternating and direct current.

The Electro-dynamometer ammeter also works on both AC and DC supply and is highly accurate.

An ammeter is connected in series with the circuit to measure the entire flow of electrons (current). The measured current and the internal resistance of the ammeter are the sources of power loss in the device. The ammeter circuit offers low resistance so that a small voltage drop occurs in the circuit.

Effect of Temperature On Ammeter

An ammeter is a device mainly used for measuring a small amount of current.

2. How are ammeters classified based on current passed?

3. Is the ammeter a thermally sensitive device?

4. The device which is used to measure the current in milliampere is known as?

5. What is the internal resistance of an ideal ammeter?