Conduction Of Electricity In Liquids

How does the conduction of electricity in liquids works? Well, we know that metals conduct electricity through mobile electrons. The outermost electrons in metals are loosely held due to which they can move from atom to atom. This is why metals are excellent conductors of electricity. Liquids, on the other hand, conduct electricity by other means. Unlike in metals, the chemical bonding in liquids does not allow for electrons to move freely. This means we have to introduce charges into the water before it can start conducting.  Certain compounds (ionic Compounds) dissolve in water, they do so by dissociating or breaking up their bonds. When the bond is broken, the components of the compound break apart to yield multiple constituent atoms with a charge on it. The atom loses an electron(s) to have more protons than electrons and similarly an atom gains electrons to have more electrons than protons. This leads to a charge imbalance leading to a positive or a negative charge on the atom. The atom that becomes charged by losing or gaining one or more electrons is called an Ion. Compounds that dissociates into ions in water are called Ionic Compounds.
You can even read a related article as given below: 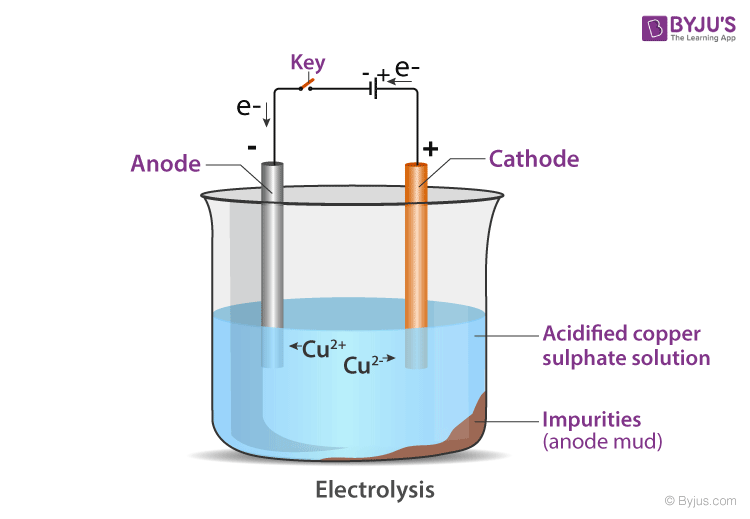 Ionic compounds contain charged particles called ions. For example, Sodium Chloride contains positively charged Sodium ions and negatively charged chlorine ions. Electrolysis is the process by which ionic substances are decomposed (broken down) into simpler substances when an electric current is passed through them. For electrolysis to work, the ions must be free to move. Ions are free to move when an ionic substance is dissolved in water or when melted. Positively charged ions move to the negative electrode during electrolysis, and they receive electrons. Negatively charged ions move to the positive electrode during electrolysis and lose electrons. Both the products of the dissociation are collected at the electrodes. For example, if electricity is passed through molten sodium chloride, the sodium chloride is broken into sodium and chlorine and gets collected at the electrodes. The metals get precipitated and the gases escape. Let’s take a look at what happens in electrolysis, specifically the electrolysis of water.

Conduction of Electricity in Liquids or Electrolysis of Water 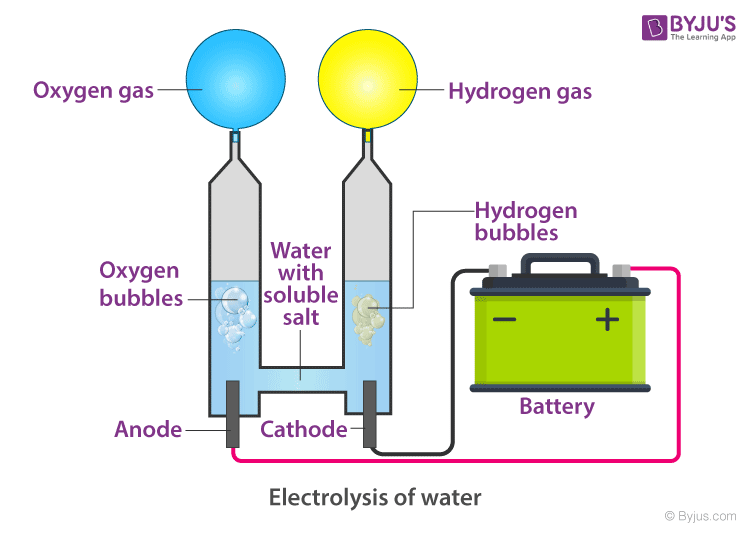 What happens when you pass electric current or electricity in liquids? Since the electrolysis of water involves the decomposition of water into oxygen and hydrogen gas due to the passage of electric current through water. An electric power source is connected to two electrodes made of an inert material like platinum and these electrodes are then placed in the water. Pure water is an insulator and cannot undergo significant electrolysis without adding an electrolyte. The electrolyte increases the conduction of pure water by introducing ions into the system. The application of an electric potential across the electrodes causes the water molecule to dissociate. The water molecule now becomes;

With the electron it receives, this reaction can be further elucidated as;

At the positively charged electrode, Anode, The negatively charged components of the solution travel to the other electrode (anode), give up their electrons and are transformed into neutral elements or molecules. The hydroxide ion (OH–) gives away its electron to the Anode to turn into a neutral oxygen molecule which escapes as gas.

Which can be broken down to

The electrons deposited at the anode make up for the electrons taken by the Hydrogen ions thereby completing the circuit. For every oxygen molecule produced at the Anode, two molecules of Hydrogen gas are being created at the Cathode. Assuming equal temperature and pressure for both gases, the produced hydrogen gas has twice the volume of the produced oxygen gas. The number of electrons pushed through the water is twice the number of generated hydrogen molecules and four times the number of generated oxygen molecules. The process of conduction of electricity in liquids or electrolysis is extremely useful to the field of electrometallurgy which means the extraction of metals through electricity. Most of the aluminium produced in this world is by the process of electrolysis or conducting electricity in liquids or some other fluids.

Test Your Knowledge On Conduction Of Electricity In Liquids!
Q5