Studying the dependence of potential difference (V) across a resistor on the current (I) passing through it and determine its resistance. Also plotting a graph between V and I

To study the dependence of potential difference (V) across a resistor on the current (I) passing through it and determine its resistance. Also, plot a graph between V and I.

The potential difference V across the metallic wire is directly proportional to the current flowing through it, provided its temperature is constant. This is known as Ohm’s law.

V∝I.
∴ V=IR, where R is the resistance, which is constant for a given metallic wire.

What are the factors affecting resistance?

Following are the factors affecting resistance:

Following is the list of materials required for this experiment:

i) Least count of ammeter and voltmeter

ii) For the reading of ammeter and voltmeter 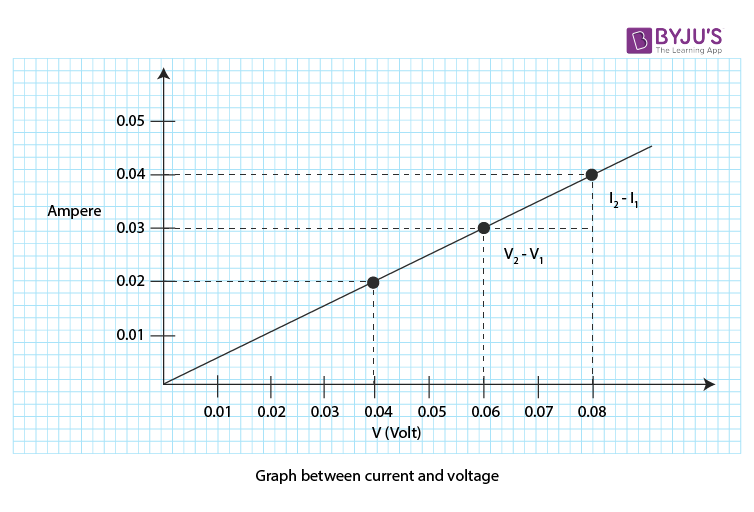 Ans: Electric current is defined as the rate of flow of electric charge in a conductor.

Q2. What is the value of charge in 1 electron?

Q3. What is coulomb?

Ans: Coulomb is an SI unit of electric charge and is defined as the amount of charge present in 6.25×1018 electrons.

Ans: If the work done in moving a charge of 1 Coulomb from one point to another is 1 Joule, then the potential difference between those two points is said to be 1 volt.

Ans: The resistance of a conductor is said to be 1 ohm if a current of 1 ampere flows through it when a potential difference of 1 volt is applied across its ends.

Stay tuned to BYJU’S to learn more about other Physics-related experiments.