We have known how electric power is generated using wind, water and other forms of energy. Electricity is generated when mechanical energy is converted into electrical energy. We are also aware that electricity is a key factor to light up our homes and is the main source for the functioning of many devices like refrigerators, washing machines, iron box, dishwashers, fans, air conditioners and many more. Let us know how electricity is supplied through these devices and how power is supplied to homes. Domestic electric circuits give an idea of how power is supplied to homes using various types of switches, wires and circuits. In this article, let us make an effort to understand what is meant by domestic electric circuits in detail.

We know power generation takes place in power stations and the power distribution takes place from the power station through large transmission lines which are supported by the large towers. These transmission lines aid in carrying a large amount of power to substations. Distribution lines carry small amounts of current which are distributed from the substations to houses. The main supply, referred to as mains, receives the power in the home and is distributed through various types of cables. When the currents flow through the cables into the devices or appliances at home, they function accordingly.

In the parallel circuit, electrons flow in several directions. Different parts of the circuit are connected in different branches. If a circuit breaks in a single direction, electric current flows in another direction.

The power supplied to homes through distribution lines are received at the mains. Electricity is supplied through two types of cables; Over head cables or underground cables.

Over Head Cables and Underground Cables

The overhead cables are usually mounted with support made of RCC, wood, steel and even reinforced plastics. The underground cables are laid by digging trenches. The cables used for the transmission and distribution of the power are known as power cables.

Assembly of one or more individually insulated electrical conductors are held together with an overall sheath. These power cables are laid inside the building as permanent wiring, buried in the ground and run overhead or exposed to the atmosphere. The design and manufacturing of power cables is as per the rated current, voltage, maximum operating temperature and usage.

Parts of power cable are:

Conductors are usually made of copper or aluminum material and are the power carrying part of the cable.

Insulating materials incorporated in the manufacturing of cable are chosen based on the operating temperature as well as the voltage and current rating of the cable. The process by which a cable is provided with more mechanical strength is known as beading. Armoring is a process by which the earthing shield to the current carrying conductors is provided. The outermost cover of the cable that protects against electrical mishaps, weather, and chemicals. Outer sheath is made of PVC or rubber.

Domestic Electric Circuits are as shown in the figure below. 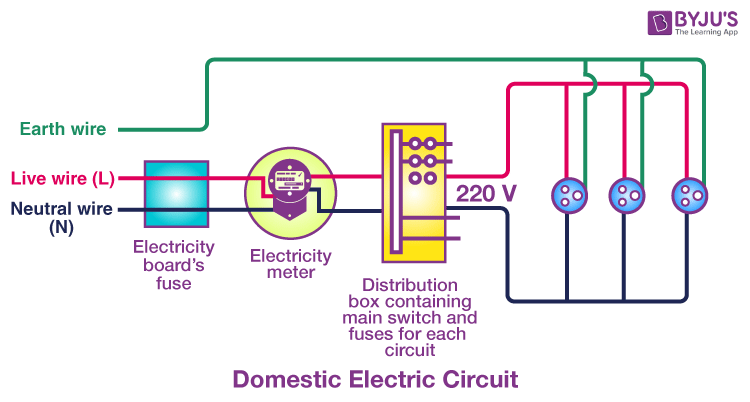 3 types of wires are involved in the domestic electric circuits, they are:

Earth wire is green in colour. Earth wire is connected to metal plates placed in the earth near the house for safety purposes. It provides safety for all the appliances and devices connected at home which have a metallic body. This is done to prevent shock when leakage of charges happens in the metallic body.

Live wire is red in colour. It is a positive conductor that helps to break the circuit when excess current flows through the circuit.

Neutral wire is black in colour. It is a negative conductor.

Note: The potential difference between live and neutral wire is 220 volts.

From the main supply, the current is passed through the circuit called a fuse. An electric fuse is used as a safety device that protects electric circuits and appliances due to fluctuation, short-circuiting or overloading of the electric circuits. Fuse offers high resistance to voltage and has a low melting point. The fuse helps in breaking the circuit when overload current, high voltage or fluctuating current passes through the circuit. When heated, it melts and breaks the connection with the circuit, helping in preventing burning of other components/circuits. Hence, fuse is an integral part of domestic wiring as a safety device.

15 Amperes current rating circuits are used for higher power consumption sources that have a high power rating. It includes an air conditioner, geysers and iron box.

Now let us know various factors like overloading and short-circuiting that affect the flow of electricity and interrupt the normal functioning of the devices.

The main reason for using the electric fuse is to prevent overloading and short-circuiting. When these occur, mishaps like circuit burning, fire and shock which can lead to severe hazard can take place.

We might experience a mild shock when we come in contact with devices that have damaged insulation or when touched with wet hands or when the body comes in contact with the metallic part of the device. When the leakage of current takes place, current flows through the body of the person in contact. To avoid this type of situation, as a part of safety and precaution, earthing is done.

Earthing is the process of protecting against unwarranted spikes and bouts of electricity that can cause damage to life and property.

We have to make sure we follow some precautions while handling electrical equipment.

See the video below, to understand the earthing of a conductor. 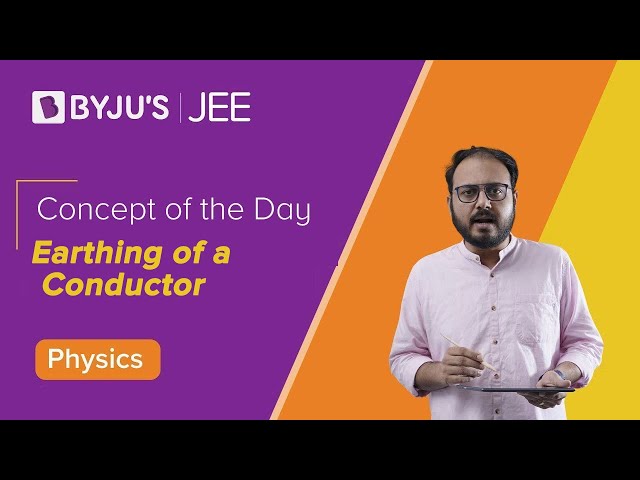 Read more about the difference between earth and neutral.

Hope you have understood about domestic electric circuits. Stay tuned with BYJU’S for more such interesting articles.

2. Which component of the circuit controls the flow of current?

Switch is the component which controls the flow of current.

3. How is short-circuit prevented?

Short-circuit is prevented by using a fuse.

4. What is the potential difference between live and neutral wire?

The potential difference between live and neutral wire is 220 volts.

5. What are the types of electrical circuit connection?

Types of electrical circuit connection are: