The First Law of Thermodynamics states that heat is a form of energy, and thermodynamic processes are therefore subject to the principle of conservation of energy. This means that heat energy cannot be created or destroyed. It can, however, be transferred from one location to another and converted to and from other forms of energy.

We have learned about heat, internal energy, and work. We also know how these concepts are related to states of the system. But before going any further we need to define thermodynamics. It is a process that brings about change in the state of a system. Now which quantities determine the state of the system? These are pressure, volume, temperature, mass or composition, internal energy, etc. These quantities are referred to as state variables and measured only at equilibrium. Why equilibrium? Suppose I heated a container containing gas from one end; initially, the temperature will not be the same everywhere but finally, it will reach an equilibrium value. So we will consider that value. We can classify state variables further as intensive or extensive. Intensive variables are independent of the dimensions of the system like pressure and temperature, while extensive variables depend on dimensions of the system like volume, mass, internal energy etc. 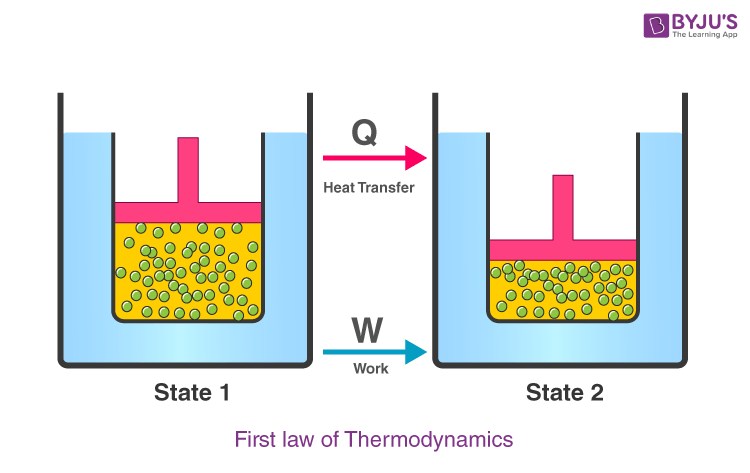 So now that we have learned about thermodynamics we will move on and try to answer what is the first law of thermodynamics. This law relates to heat, internal energy, and work. According to this law, some of the heat given to system is used to change the internal energy while the rest is used in doing work by the system. It can be represented mathematically as

We can also represent the above equation as follows,

So we can infer from the above equation that the quantity (ΔQ – W) is independent of the path taken to change the state. Further we can say that internal energy tends to increase when heat is given to the system and vice – versa.