We are familiar with solid, liquid, gas, and plasma states of matter. We also know how these matters behave when force or stress is applied to them. We have learned how the molecules in solid, liquid, and gas undergo change. In this session, let us learn in detail about fluids. Let us also know the types of fluids, characteristics of fluids, along with definitions and examples that relate to our daily life.

What is a Fluid

Fluids undergo continuous deformation, i.e. fluids always keep flowing. To define fluid, it is a substance that does not possess a definite shape and easily yields to external pressure. Fluid is any liquid or gas or any material that is unable to withstand a shearing or tangential force, when at rest. When the said forces are applied to the fluid, it goes through a continuous change in shape. Fluids are substances with zero shear modulus, i.e they cannot resist the shear force applied to them.

In our day-to-today life, we would have heard the dehydrated patient advised to consume more fluids to compensate for the water loss. Fluids help in the digestion of food, hence we need to take more fluids.

Fluids are classified into four types depending on its flow, they are:

Steady fluid: It is the fluid whose density remains constant at each and every point while flowing.

Unsteady fluid: It is the fluid whose velocity differs between any two points while flowing.

Fluids with more thickness or viscosity are known as viscous fluids, they are generally very gloppy fluids. Examples: shampoo and motor oil.

If the fluid rotates as a whole with no change in angles between the boundary lines, the flow of the fluid is classified as irrotational flow.

Based on the study of fluids, they are classified into two types, they are:

Fluids statics: It is the mechanism of fluids at rest or non-motion, and the pressure in fluids exerted by fluids on anybody.

Fluids dynamics – It involves the study of the flow of fluids at motion. Popular branches like aerodynamics and hydrodynamics are part of fluid dynamics. 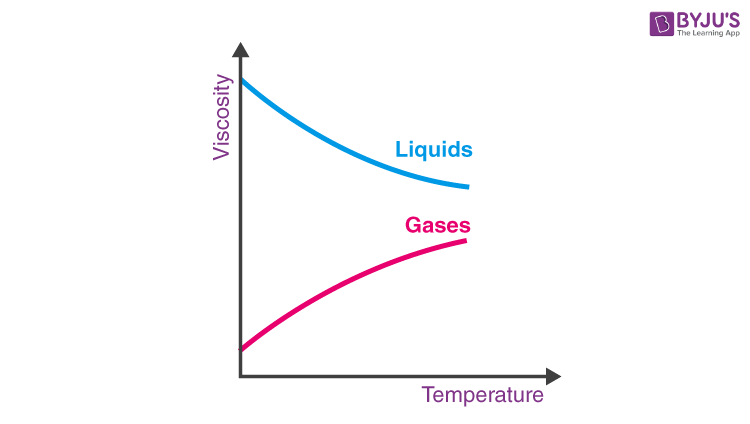 The degree of hotness or coldness of the body is determined by the temperature. The temperature of the fluid is measured using Kelvin or Celsius or Fahrenheit. According to the International System of Units, the Kelvin scale is used.

The pressure of a fluid is the force applied by it per unit area. Fluid pressure takes place in two conditions: open condition and closed condition. The pressure at any given point of a static fluid is called hydrostatic pressure.

The SI unit of specific volume is

It is the tendency of liquid surfaces to shrink in minimum surface area. Surface tension is caused by cohesive forces between the liquid molecules.

Note: Surface tension is the main reason for most insects to float on the water despite being denser than water.

The process of cavitation happens when bubbles or voids form within a fluid. This process takes place when the pressure drops instantaneously below the vapour pressure.

After knowing the properties of fluids, let us know various types of fluids.

After learning the properties of fluids along with its classification, let us learn the types of fluids.

Ideal fluid: It is a fluid that does not have viscosity and cannot be compressed. This type of fluid cannot exist practically.

Real fluid: All types of fluids that possess viscosity are classified as real fluids. Examples: Kerosene and castor oil.

Newtonian fluid: A real fluid that abides by Newton’s law of viscosity is known as a Newtonian fluid. Example: Hydrogen and water 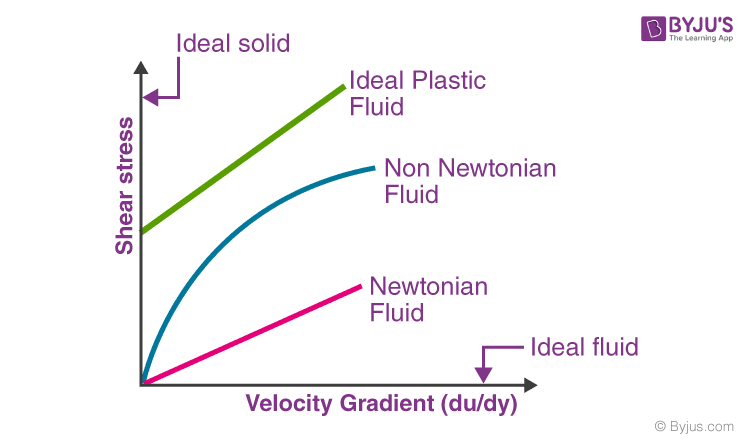 What is a fluid?

A substance that does not possess a definite shape and easily yields to external pressure is known as a fluid.

The study of the flow of fluids at motion is known as?

The study of the flow of fluids at motion is known as fluid dynamics.

The fluid whose density remains constant at each and every point while flowing is known as steady fluid.

State true or false: Fluids do not oppose deformation.

Yes, air is a fluid. Any substance that flows is termed as fluid.

Stay tuned with BYJU’S and fall in love with learning!.