What is a Galaxy?

A galaxy is a sprawling space system which is composed of stars, dust, interstellar gas, stellar remnants,  and dark matter and all held together by gravity. The word ‘Galaxy’ is termed from the Greek word ‘galaxies‘. It is tough to tell how big the universe is! The universe has many galaxies, and each carries millions of stars which are bounded by a unique force known as gravitational force.  There are approximately 70,000 million stars in the universe. The solar system where our earth exists is in the Milky Way Galaxy. 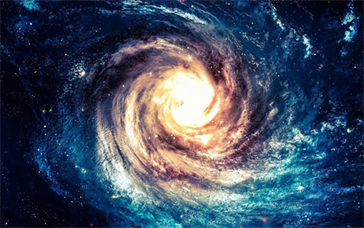 Galaxies differ from each other in shape, size, colour and composition. There are three types of galaxies that we find in the universe.

These type of galaxies are like flattened balls of old stars and contain very little gas. It also includes the most massive galaxies containing a trillion stars.

Spiral galaxies have a flattened the shape. They have a bulge in the centre composed of old stars surrounded by a disk of young stars and are arranged in spiral arms.

As its name suggests, Irregular Galaxies have no particular shape. There are billions of galaxies in the universe, the centre of the galaxy releases a huge amount of heat, radiation, radio waves and x-rays.

Galaxies are too far from us, that is, a spacecraft that moves with a speed of 60,000 km/hr reaches Alpha Centauri Galaxy which is 4.2 light-years after 80,000 years. Milky Way Galaxy includes the sun, earth, and our solar system. It contains dust particles, huge clouds, and gasses that lie throughout it and depths of interstellar space. The term Milky Way refers to the large portion of the Milky Way galaxy that can be seen from earth as well.

Test your knowledge on Galaxies
Q5