The objects that are at a distance or nearby can be focused by the human eye due to its abilities. To watch objects that are nearby and focus on them the lens of the eye has a short focal length. If the curvature of the lens is large it will be able to focus on closer objects whereas if the curvature is small it will be able to focus on objects further far away. Most of the time, the effects of the defect start showing up at the extreme ends of the visual spectrum. 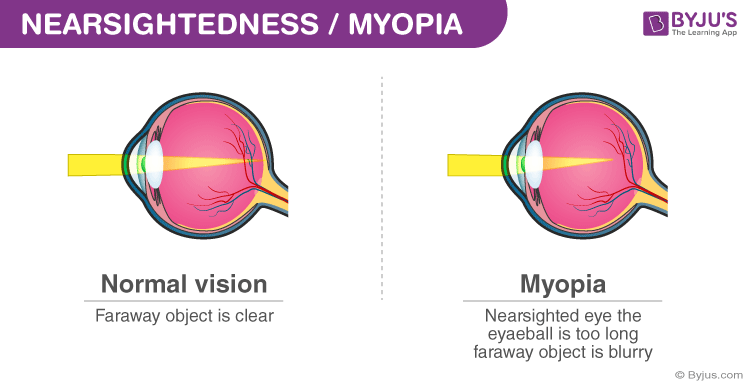 Myopia or Nearsightedness occurs when the eye loses its ability to focus on far-off objects as the lenses do not possess a long focal length. Objects that are near are clearly visible to patients of this defect. As we know, from the reference for countless ray diagrams describing the functioning of the eye, when the light suffers higher refraction than the usual the eye would not be able to form an image for faraway objects.

Hereditary is one of the natural factors for a person to have the defect of myopia. If any of the parents have the defect then there are chances that the child will inherit the same defect upon reaching adulthood.

Mostly the young folks suffer from myopia that occurs due to elongation of the eyeball or bulging of the cornea. When the normal curvature of the cornea bulges, the light rays are refracted in such a manner that the image is formed in front of the cornea. The rods and cones of our eyes have areas where when the image is focused it has the best clarity. Thus, as the image of the distant objects is not formed at the right spot, it is detected as blurry.

Another worst cause of this type of eye defect is uncontrolled diabetes. Some unattended cataract growths may also lead to myopia.

The formula used to calculate the power of the correcting lens for myopia is by using the approximate formula of the focal length of combined lenses given as:

Nearsightedness – How to correct it?

A diverging lens can be used to fix the problem of nearsightedness. As mentioned above, the image was blurry as the light rays were not diverging at the right point and creating a focused image. The rays get focused before it reaches the retina. The convergence of the light rays takes place due to the cornea producing an image on the retina 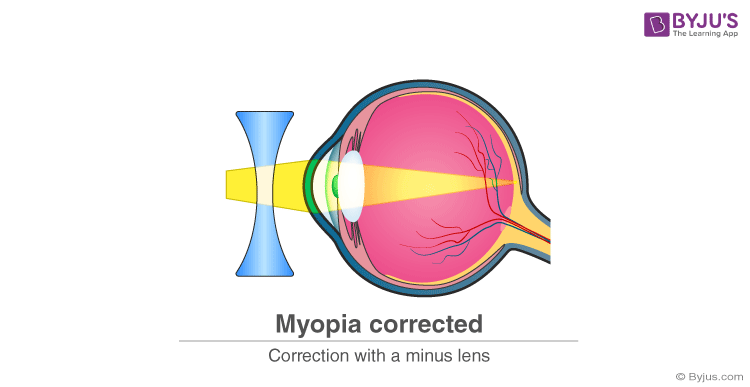 Unlike when viewing objects that are near, in the diagrammatic depiction above, the light rays are coming from far off points which make them roughly parallel to each other by the time they reach the cornea.

Test your Knowledge on Myopia
Q5